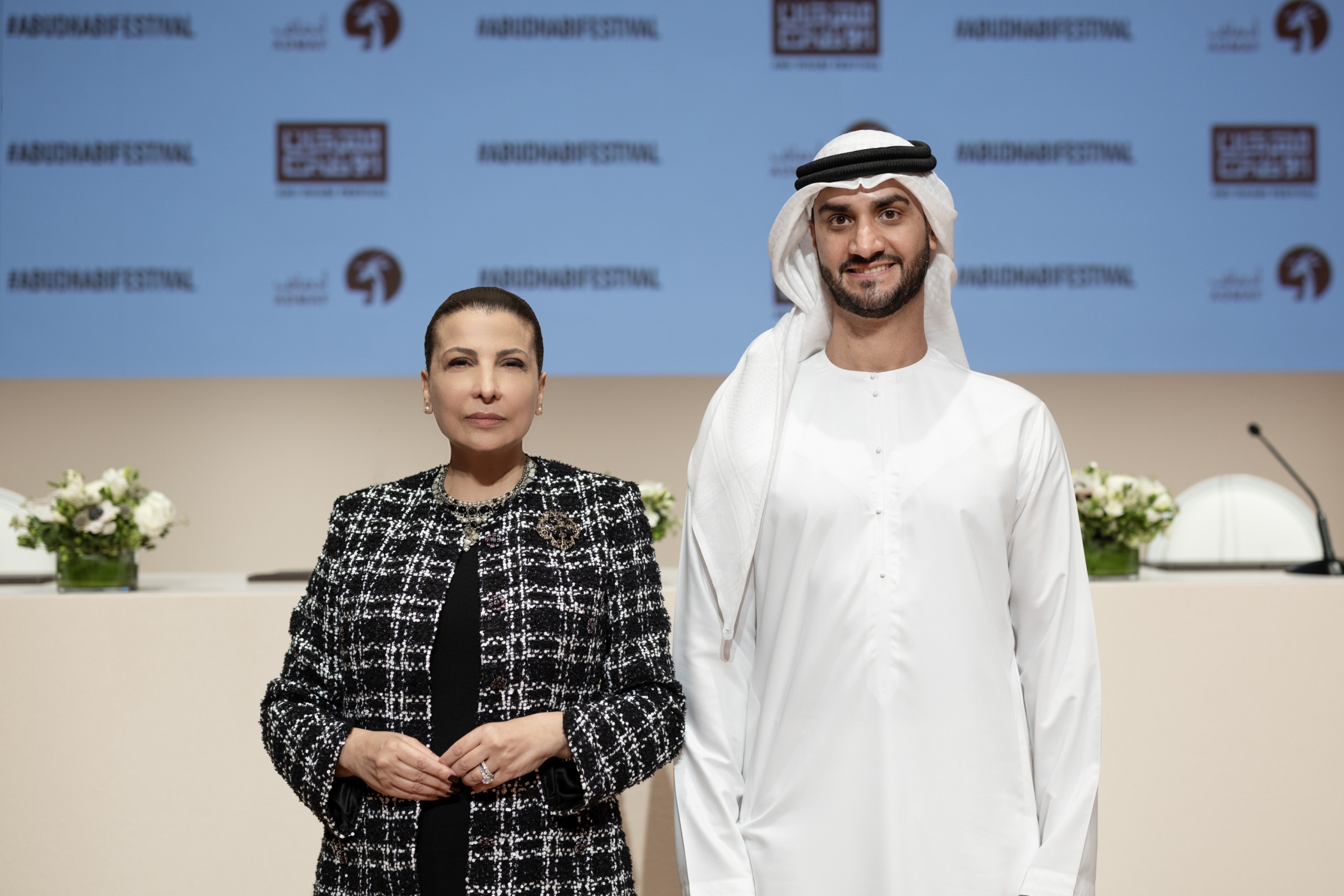 Under the patronage of Her Highness Sheikha Shamsabint Hamdan bin Mohammed Al Nahyan, Assistant to the President of the Red Crescent Authority for Women’s Affairs, Head of the Higher Committee for the Ataya Initiative, the Abu Dhabi Music & Arts Foundation announced in a press conference the Abu Dhabi Festival 2023programme held under the theme “The Will for Evolution,” reflecting the nation’s unwavering drive for progress and prosperity. The Festival’s headlining events will take place during the first three weeks of March, with its Abroad Programme and community-wide initiatives happening throughout the year.

His Excellency Sheikh Shakhbout bin Nahyan bin Mubarak Al Nahyan, Minister of State, delivered a speech on behalf of Her Highness Sheikha Shamsabint Hamdan bin Mohammed Al Nahyan, Patron of the Abu Dhabi Festival, and said: “The Abu Dhabi Festival’s 2023 edition is the culmination of a 20-year journey of humanitarian and cultural efforts, and continuous innovation, supporting the UAE’s growth and development. These efforts were mapped following the vision of our wise leadership to enable the culture, art, and creative industries sector and promote their contribution to the UAE’s economic diversification, based on a solid belief in the sector’s significant role in sustainability and well-being of our people,” said His Excellency.

“In line with the national vision for the coming decade, the Abu Dhabi Festival attracts creatives and thought leaders, and invests in young talents, to unlock a new era of innovative and modern thinking deeply-rooted in our authentic cultural identity.” HE added. “As we are gathered here today to announce the agenda of the festival’s 2023 agenda, I convey to you the warmest regards of our festival’s patron, Her Highness Her Highness Sheikha Shamsabint Hamdan bin Mohammed Al Nahyan. Over the past two decades, this festival developed to become one of the region’s most prominent cultural and art events, highlighting the UAE’s position as a leading regional and global hub for creativity. With this year’s theme ‘The Will for Evolution’, we launch on a journey of collaboration with cultural institutions in the UAE and beyond.

“The Abu Dhabi Festival is a key player in promoting the UAE’s soft power and cultural diplomacy, bridging the gaps between cultures, and elevating the UAE’s global presence and footprint in various fields. I express my gratitude to all the sponsors and partners and wish you a successful edition, to be added to the festival’s 20 years of success.” HE concluded.

Her Excellency Huda Alkhamis-Kanoo, Founder of the Abu Dhabi Music & Arts Foundation and Founder and Artistic Director of Abu Dhabi Festival, delivered the opening remarks at the press conference held at the Emirates Palace Hotel and attended by a number of distinguished dignitaries, creatives, artists, and intellectuals from around the world.

Reflecting on the theme for the 20th edition, HE Huda Alkhamis-Kanoo, said: “The theme for Abu Dhabi Festival 2023 is inspired by the determined will of the late Sheikh Zayed to forge a nation that stayed true to its heritage while striving for modernity. This progressive will to march forward remains embedded in the fabric of our nation. His Highness, President Sheikh Mohamed bin Zayed Al Nahyan has made this unbreakable will the essence of the nation’s roadmap for the future.”

When speaking about the significance of the 20th edition of Abu Dhabi Festival, HE Huda Alkhamis-Kanoo said: “Today, as Abu Dhabi Festival prepares to celebrate its 20th anniversary, we choose to not look back at our past accomplishments but rather ahead, toward the next 20 years and the potential we hold to shape them.  Abu Dhabi Festival is a festival honouring the people who made the Festival the spectacular international celebration of music, arts and culture that it has become. I feel proud that our organization has been shaped by society more so than it has influenced it. You spoke and we listened. You wanted to meet, exchange ideas, and gain knowledge and we provided the opportunity to do so.  As the festival of firsts, we listen to our artists and through our commissions, productions and world premiere presentations, we help realise their dreams. We invest in the youth and continue our commitment to bring their ideas to life.

“We have learned a lot over the past two decades, and perhaps the biggest lesson remains that we have yet much to learn. We pledge to continue our quest to discover new and greater prospects, to build and sustain the creative economy, to nurture cultural and artistic growth, and to spread the power of the arts to unite people for a brighter future,” she continued.

HE Mohamed Khalifa Al Mubarak, Chairman of DCT Abu Dhabi said: “We congratulate everyone at ADMAF on the occasion of Abu Dhabi Festival’s 20th anniversary. The close partnership between us provides rich and fertile ground for culture to flourish sustainably, enabling growth and strengthening Abu Dhabi’s position as a cultural leader on the global stage. This year’s theme – The Will for Evolution – shows how we can expand the boundaries of creativity to ensure our youth have all means necessary to dream and reach new heights through unlimited ambition. We look forward to continued partnership and are proud to collaborate with ADMAF as together we can transform the cultural landscape for now and generations to come.”

A return to live events at Emirates Palace

Abu Dhabi Festival kicks off its thrilling programme of events on 1 March 2023at Emirates Palace with Juan Diego Flórez and Friends by the acclaimed Peruvian tenor Juan Diego Flórez, who will take audiences on a two-hour musical journey featuring a programme of arias followed by a repertoire of Peruvian and Latin American songs accompanied by an orchestra.

On 10 March, De Scheherezade a Yo, Carmen will premiere for the first time in the Middle East at Emirates Palace. Hailed all over the world as one of the finest contemporary flamenco shows, Vanguard flamenco dancer and choreographer María Pagés transcends two legendary female characters— Carmen, the gypsy cigarette girl from Mérimée’s novella made famous by the Bizet opera and the quick-witted storyteller of the Arabian Nights. The show is a co-production by Abu Dhabi Festival and Gran Teatre del Liceu in Barcelona.

The following evening on 11 March, two-time Grammy Award-winning Jazz musician Gregory Porterwill make his UAE debut performing a set of his smooth original tracks from his albums Liquid Spirit (2014) and Take Me to the Alley (2017) as well as captivating renditions of the classics joined by Chip Crawford on piano, Emanuel Harrold on drums, TivonPennicott on Saxaphone/Horns and Jahmal Nichols on bass.

For the first time in the Middle East,  Grammy and Academy Award-winning composer Tan Dun, renowned for his ability to span the boundaries of classical music and Eastern and Western traditions, conducts the Orchestra of Teatro Comunale di Modena Pavarotti-Freni, joined by world-famous Chinese cellist Jian Wang, in an unforgettable musical journey entitled From West to East: A Classical Odyssey. Featuring an iconic repertoire of Mozart, Tchaikovsky and Mussorgsky, the performance will be followed by the UAE premiere of his original Pipa Concertoon 17 March at Emirates Palace.

Abu Dhabi Festival will also present an exciting recital series taking place at NYUAD Theatre featuring world-renowned musicians. On 14 March 2023, winner of the 2021 International Chopin Piano Competition and international star pianistBruce Liu,performs a thrilling programme of classical and romantic highlights in a spectacular recital full of enthusiasm, passion and excitement for the first time in the Arab world.

Two days later on 16 March, Haochen Zhang who became an international sensation upon winning the gold medal at the Thirteenth Van Cliburn International Piano Competition in 2009 will perform in a unique recital showcasing the fearless imagination and spectacular musical mastery for which he is known.

Sixteen-year-old violin prodigy Leia Zhu will also take the stage as part of the recital series on 20 March accompanied by versatile Swiss musician Benjamin Engeli on piano. The British-Chinese virtuoso, whose solo career includes performing with the London Symphony Orchestra, will display her renowned talent and impressive technical ability in this special recital featuring a beautiful repertoire of Mozart, Strauss, Debussy, Wieniawski and Sarasate.

In addition to local events, Abu Dhabi Festival partners with world-renowned institutions to present a number of co-productions and commissions abroad taking place throughout the year. The programme commences with a co-production with the Metropolitan Opera and the Opera de Quebec ofRichard Wagner’s The Flying Dutchman from 30 May 2023 to 10 June 2023. The opera is directed by François Girard and features bass-baritone Tomasz Konieczny, alongside incandescent soprano Elza van den Heever and tenor Eric Cutler. Maestro Thomas Guggeisconducts the Metropolitan Opera Orchestra  in the performance taking place at the Metropolitan Opera, Lincoln Center in New York.

Throughout 2023,  Abu Dhabi Festival will present its co-commission and production of Joyce DiDonato’sEdenworld tour with acclaimed chamber orchestra il Pomo d’Oro. Exploring the majesty, might, and mystery of nature through both arresting and evocative music and theatrical effects, DiDonato takesaudiences on an emotional journey to reconnect to the power and fragility of nature, exploring our place within this kaleidoscopic, wondrous world around us.

Additionally, the Abu Dhabi Festival co-commission of The American Ballet Theatre’s ZigZagchoreographed by renowned Jessica Lang to celebrate the legendary career of Tony Bennet will continue with dates throughout 2023 in the United States and will conclude with a performance at the 2024 Abu Dhabi Festival with the participation of 14 dancers.

As part of its mission to support Arab musicians abroad, Abu Dhabi Festival will present the New York Arab Orchestra with LaythSidiq, its co-production with the Middle East Institute, at Merkin Hall, New York City in December 2023. The New York Arab Orchestra, one of the leading Arab orchestras performing classical music in the United States, and award-winning violinist and composer LaythSidiq perform together, keeping the traditions of Arabic music vibrant and alive.

In celebration of World Arabic Language Day, the accomplished musicians of the UN Chamber Music Society of the United Nations Staff Recreation Council (UNCMS), together with the Abu Dhabi Festival, will once again celebrate World Arabic Language Day at the prestigious Carnegie Hall, New York on 18 December. The concert celebrates the historic role of the Arabic language in the development of art and science and will feature a variety of popular and classical music from the Arab region.

In addition to the exciting programme of events happening both in the UAE and abroad, Abu Dhabi Festival will continue to present its annual community and education initiatives throughout the year which support students and artists alike. Initiatives include the yearlyRiwaq Al Fikr talk series of online and in-person discussions between world-renowned musicians, composers, conductors, choreographers and performers and university students, and the Riwaq Al Adab Wal Kitab initiative supporting Arabic literature and the Emirati publishing industry. Additionally, Festival in the Park will return to Umm Al Emaraat Park in March 2023 with performances by rising Emirati musicians.

The Emirates Youth Symphony Orchestrawill once again be participating in the Festivalfor the 20th edition with performances in Dubai on 9,10 and 11 March. Under the baton of Syrian-Czech maestro Riad Kudsi and guest Czech Conductor Ladislav Cigler, the orchestra comprised of the brightest young international musicians, will perform a repertoire of Baroque and classical music’s most renowned pieces as well as works by Arab composers Haitham Sukkarieh and Mazen Issa.

Among the albums produced by the Festival this year as part of its Composers’ Platform in support of Arab musicians will include Ancients and Troubadours: From the East to the West and Backby Emirati opera star Sara Al Qaiwani with the London Chamber Orchestra, a modern take on a suite of 6 new compositions based on ancient and mediaeval folk melodies and texts from the Mediterranean beginning in Yemen, Egypt and Greece and continuing on to Spain and France.

The post Abu Dhabi Festival Announcesline-up Of 20th Anniversary Edition Held Under The Theme ‘The Will For Evolution’ first appeared on Abu Dhabi Blog.