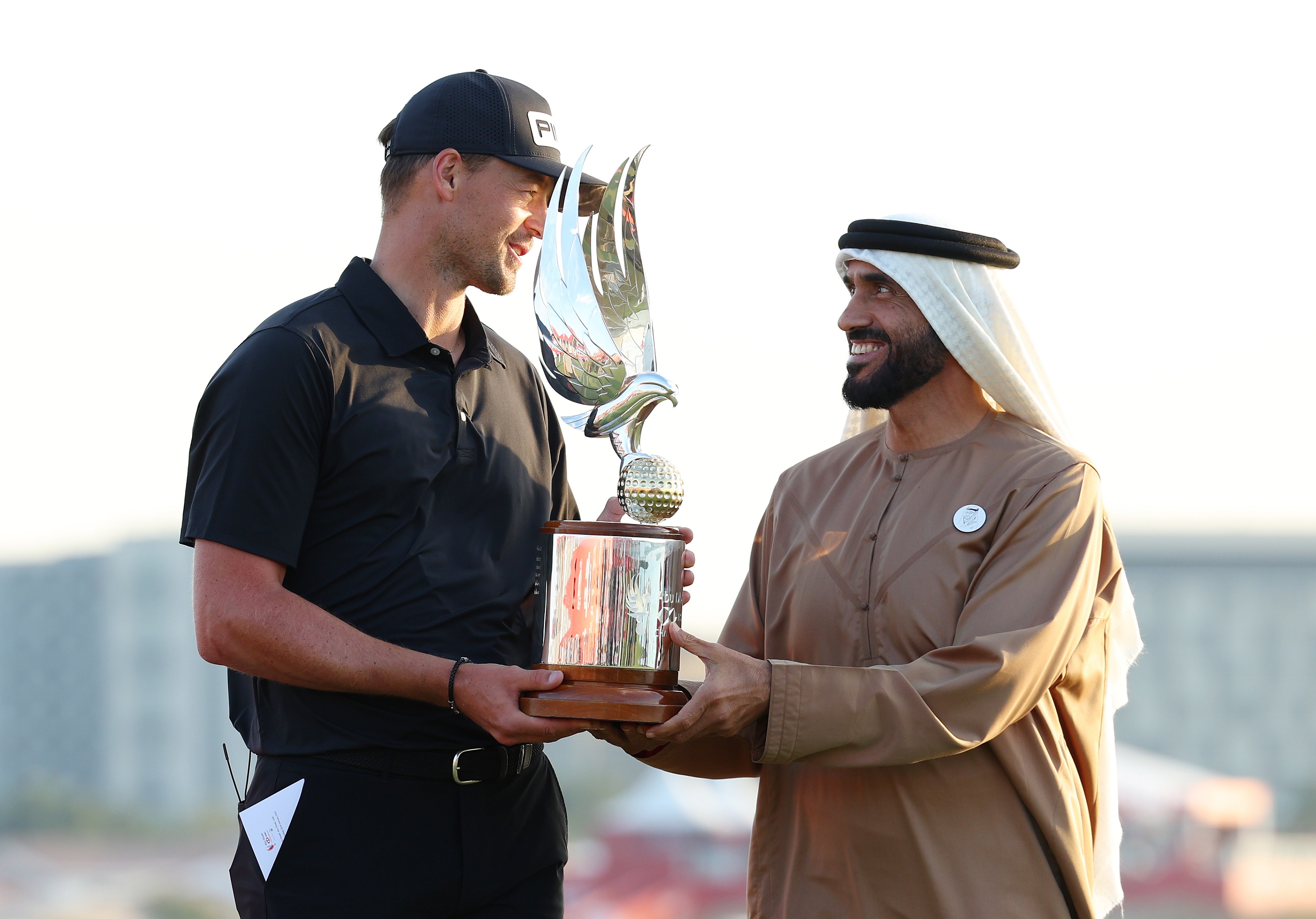 Victor Perez produced a dramatic finish in the final round of the 2023 Abu Dhabi HSBC Championship to overcome a high-class chasing pack and win his maiden Rolex Series title at Yas Links Abu Dhabi.

The Frenchman held a narrow one-shot lead in the closing stages on Sunday afternoon before holing out from a bunker at the 17th for a birdie to stretch his advantage to two.

And even though he ran into trouble at the 18th, a bogey there was enough to secure a one-shot win as he closed with a 66 to finish the tournament on 18 under par, with Australian Min Woo Lee and Sweden’s Sebastian Söderberg sharing second place on 17 under par.

Perez entered the final day one stroke back but made an excellent start as he made the turn at four under and continued his charge with back-to-back birdies to begin the back nine. He responded to a dropped shot at the 14th with a birdie at the 15th before wild scenes erupted on the 17th as the 30-year-old’s sublime bunker shot found the bottom of the cup.

That hole-out ultimately sealed his victory as he moved to the top of the Race to Dubai Rankings in Partnership with Rolex and second in the Ryder Cup European Points List, with the race for a spot on Captain Luke Donald’s team for the biennial contest at Marco Simone in September well and truly under way.

Three-time Major Champion Pádraig Harrington finished fourth on 16 under par after posting rounds of 64-67 over the weekend, while Sweden’s Alex Noren and Italian Francesco Molinari shared fifth on 14 under par.

England’s Tyrrell Hatton, who aced the par three 13th on his way to a seven under round of 65, finished tied seventh with Australian Jason Scrivener and India’s Shubhankar Sharma joining him on 13 under.

Joburg Open Champion Dan Bradbury made it a memorable start to 2023 as he also carded a hole-in-one during the final round. The Englishman’s effort at the 17th hole earned him a Genesis G70 Shooting Brake, with the penultimate hole being sponsored by the global luxury automotive brand.

Finland’s Sami Välimäki was one of seven players sharing tenth after posting a ten under par round of 62 and setting a new course record at Yas Links Abu Dhabi.

Victor Perez: “Feels fantastic. I thought you always need a bit of fortune and there’s always the deciding shots coming down the stretch that can make or break. To hole that bunker shot on 17 is probably going to be a highlight for a little bit I hope. I’m not expecting the guys not to do incredible shots but yeah, I was delighted with that, and six was enough on 18.

“I was just trying to fly the ball all the way to the hole and if it came up a bit heavy was probably going it release down to the hole and probably have an eight-footer for par but I was expecting Sebastian to hole his putt for birdie.

“I felt like I had a great preparation. I had a really big break of work that I was able to do, which is difficult and rare to have time off. I think now the season is so packed. There are so many events. It’s so hard to train. You either train or you rest. It’s hard to prepare.

“I was actually able to have a nice block. I decided not to play in December to focus on the season ahead with all the objectives that are coming up with the ten cards for the PGA TOUR. There is the Ryder Cup; there is so much going on.

“Last week was a nice glimpse of where my game was at but again, it’s match play. You have a partner that’s going to help you out. Guido (Migliozzi) bailed me out many of times last week where it made me look good and all of a sudden you’re playing your own. I had a really good single against Jordan (Smith) on Sunday, which gave me some confidence, but again it’s one round and it doesn’t really mean anything.

“To come out and put it together for 72 holes on a tough golf course with the wind, having played only one round with cool weather on Friday morning, yeah, I was delighted with the victory.”