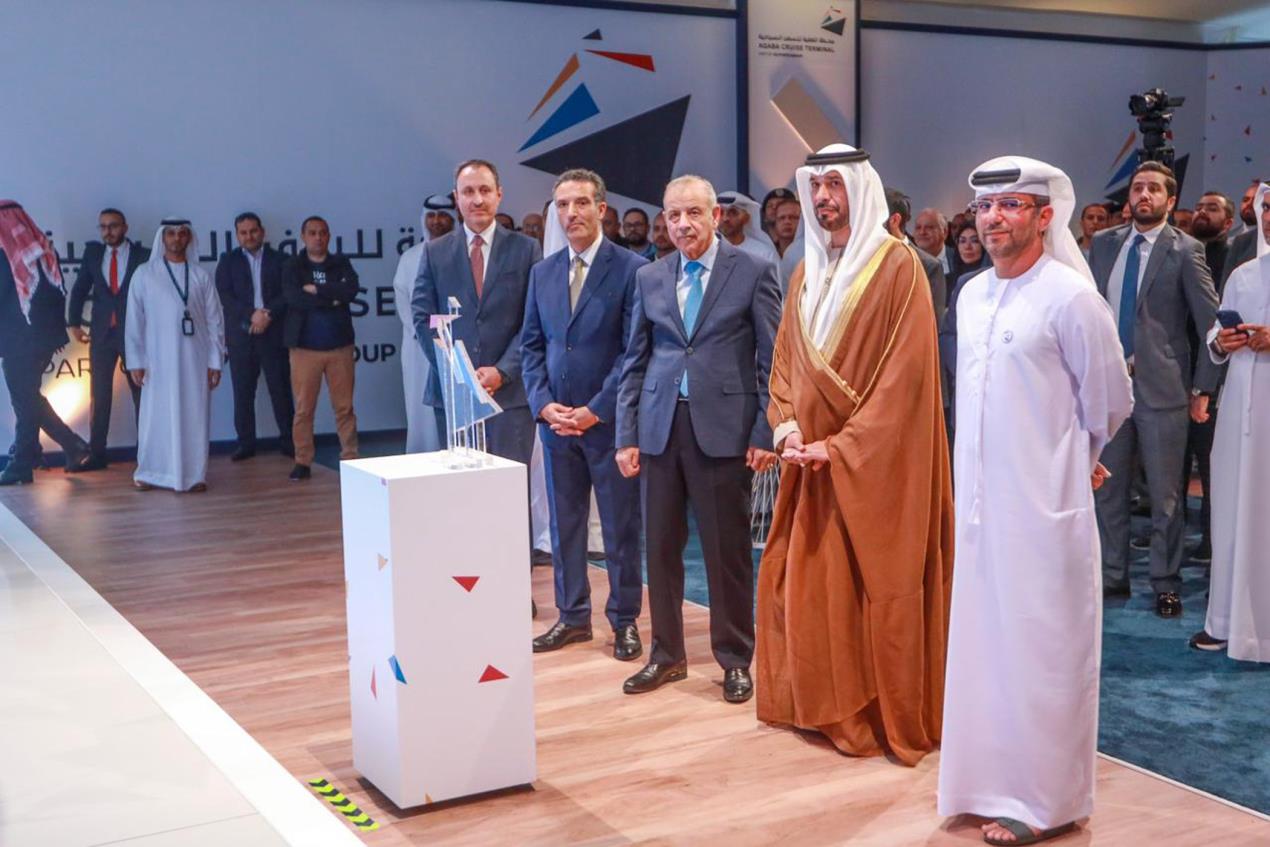 H.E. Sheikh Khalifa Bin Mohammed Bin Khalid Al Nahyan and H.E. Kreishan took a tour and were briefed by Captain Mohamed Juma Al Shamisi, Managing Director and Group CEO of AD Ports Group, on the facility’s wide array of amenities and services that cater to the needs and expectations of international tourists visiting the Kingdom. The inauguration was attended by H.E. Eng. Nayef Fayez, Chief Commissioner of ASEZA; H.E. Hussein Safadi, CEO of Aqaba Development Corporation; and several senior officials from both sides.

Under the agreement with Aqaba Development Corporation, AD Ports Group will develop, manage and operate the Aqaba Cruise Terminal, a world-class facility for international cruise passengers looking to visit Jordan, specifically Aqaba, Petra and Wadi Rum. Over 50 vessels are scheduled to dock at the Aqaba Cruise Terminal over the next four months, bringing tens of thousands of visitors to the popular winter-sun destination.

H.E. Sheikh Khalifa Bin Mohammed Bin Khalid Al Nahyan, UAE Ambassador to Jordan, said: “The Aqaba Cruise Terminal is the result of the active cooperation and strategic partnership between the UAE and the Hashemite Kingdom of Jordan. Our longstanding, deep-rooted brotherly relations throughout history have today reached advanced levels of coordination on numerous fronts, with both countries serving as model examples of collaboration, wisdom, reason, peace, tolerance and forgiveness for the region and the world. The UAE is a key strategic partner for Jordan in a number of fields and is keen to propel mutual economic and investment cooperation to greater heights, while building on existing partnerships across different domains. Trade volumes amounted to around USD 3 billon last year, and UAE investments in Jordan reached over USD 17 billion. Ties between the UAE and Jordan have been strengthened even further thanks to the progressive vision and interests of both countries, representing a robust and growing strategic partnership across several vital areas. I would like to thank the Jordanian leadership, government and the nation for their cooperation, further reflecting the depth of the brotherly relations between our countries.”

H.E. Falah Mohammad Al Ahbabi, Chairman of AD Ports Group, said: “The inauguration of the Aqaba Cruise Terminal reflects the ongoing cooperation and strategic partnership between the two brotherly nations, propelling them to new heights. As the first and only facility of its kind in the country, the Aqaba Cruise Terminal not only offers an unprecedented opportunity to tap into the fast-growing cruise industry, but also enables us to share our longstanding expertise in operating leading-edge cruise terminals, while supporting AD Ports Group’s international growth strategy by leveraging Aqaba’s pivotal location and vast potential as a regional hub on the Red Sea.”

H.E. Eng. Nayef Fayez, Chief Commissioner of ASEZA, Chairman of Aqaba Development Corporation, said: “At ASEZA, we remain committed to transforming the city of Aqaba into a competitive investment, commercial and tourism destination on the Red Sea, and the successful inauguration of the Aqaba Cruise Terminal today aligns with these endeavours. We thank our partners at AD Ports Group for believing in the vast potential of Aqaba and for sharing our ongoing efforts to stimulate and enhance sustainable economic activity at one of Jordan’s most vital gateways.”

Captain Mohamed Juma Al Shamisi, Managing Director and Group CEO of AD Ports Group, said: “We sincerely thank H.E. Tawfiq Kreishan, Deputy Prime Minister and Minister of Local Administration, for inaugurating the Aqaba Cruise Terminal under the patronage of the Prime Minister. This new facility seeks to elevate Aqaba’s travel experience and leverage its prime location and growth potential to attract tens of thousands of international visitors to explore Jordan’s top attractions, thereby adding economic value to the coastal city while establishing its position as a destination of choice in the Levant region. We thank our valued partners, namely Aqaba Development Corporation and ASEZA, whose partnership continues to be instrumental in enhancing Aqaba’s position as a leading tourism and business hub.”

H.E. Hussein Safadi, CEO of Aqaba Development Corporation, said: “This strategic partnership serves as a testament to the steadfast collaboration between Jordan and the UAE, firmly positioning Aqaba as a major player within the global arena, while helping promote national plans and drive economic prosperity. Not only that, but the subsequent digital transformation resulting from this partnership will also foster a new ecosystem that significantly enhances the resilience of Aqaba’s maritime sector.”

A role model of a successful public-private partnership, the Aqaba Cruise Terminal provides an exceptional travel experience, setting Jordan as a pivotal destination for leisure travellers and signifying economic prosperity. A unique project in the Kingdom, the Aqaba Cruise Terminal will diversify the entry options available for passengers arriving in Jordan and will be an integral part of AD Ports Group’s Marsa Zayed, a mega mixed-use waterfront project comprising residential, retail, F&B, commercial and office spaces, hotel and leisure areas designed to bolster Aqaba’s status as a regional tourism and business hub.

Besides the Aqaba Cruise Terminal, four strategic agreements are planned between AD Ports Group and Aqaba Development Corporation regarding Marsa Zayed, Maqta Ayla for the development and operation of an advanced Ports Community System, Aqaba Multipurpose Port and the development, management and operation of King Hussein International Airport, which collectively will help position Aqaba as a major regional destination, as well as a catalyst for investment attraction and economic development.