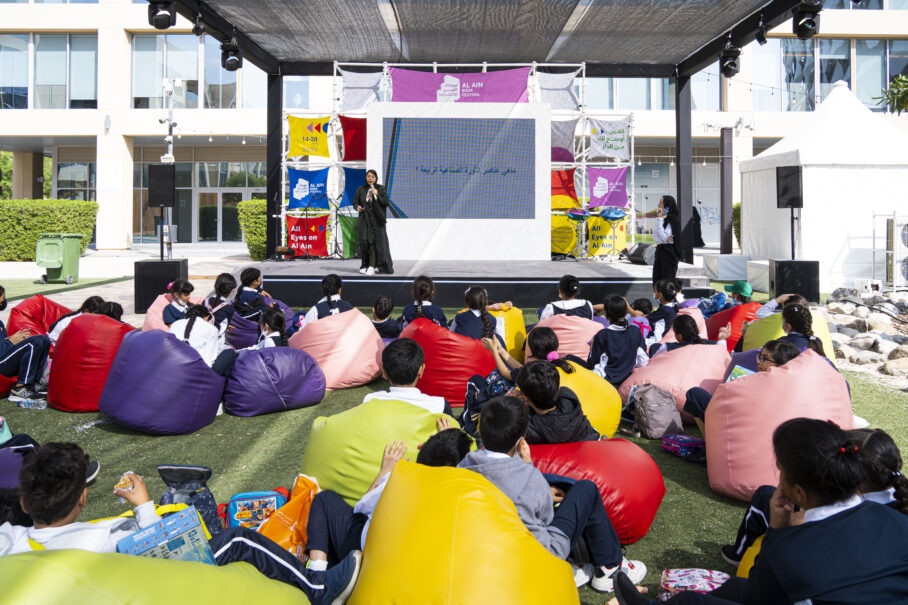 Under the patronage of His Highness Sheikh Tahnoun bin Mohammed Al Nahyan, Ruler’s Representative in Al Ain Region, Al Ain Book Festival 2022 was launched today , which for the first time ever takes place across five cultural sites across the city.

The annual event, previously organised as a Book Fair, has been reinvigorated by the Abu Dhabi Arabic Language Centre (ALC) with a dynamic free-of-charge events programme celebrating the work of Emirati and Arab writers and creatives, past and present.

A spectacular pre-opening concert took place at Al Jahili Fort on Saturday 12 November with performances by renowned Arab singers. Throughout the week, the Al Ain Square at the Hazza bin Zayed Stadium will be the hub of the Festival, hosting live music, performances, art shows and children’s activities.

The Festival is organised by the ALC, part of the Department of Culture and Tourism – Abu Dhabi (DCT Abu Dhabi), as part of its mission to preserve and promote the Arabic language and Emirati culture, with a renewed focus on Al Ain as a cultural and creative hub for the region.

Throughout the week, highlight events include ‘Sung Poetry’, a beautifully curated series of daily poetry evenings at the Qasr Al Muwaiji (Muwaiji Palace); live music from around the world, theatrical performances, and a children’s programme including arts and crafts workshops, storytelling and competitions, all hosted in Al Ain Square at the Hazza bin Zayed Stadium. There will also be inspiring Arabic-language cultural seminars on topics such as ‘Female role models’ at Bait Mohammed Bin Khalifa.

His Excellency Dr. Ali Bin Tamim, Chairman of the ALC, said: “The Al Ain Book Festival is a vital platform to celebrate the work of Emirati writers, intellectuals and innovators, and through this annual event, the ALC seeks to nurture a culture of reading that is inherent to Emirati heritage and values. The reinvigorated Festival programme is also an opportunity to promote a strong sense of community in young Emiratis and inspire the values of culture and creativity that are integral to the United Arab Emirates. The Festival aims to offer something for everyone and highlights Abu Dhabi’s leading position in producing major cultural events at the highest regional and international standards.”

Under the slogan ‘All Eyes on Al Ain’,  the 13th edition of the event will shine a new light on Al Ain’s rich cultural heritage. Home to the UAE’s first UNESCO World Heritage Sites, Al Ain is not only the birthplace of the UAE’s Founding Father, Sheikh Zayed Bin Sultan Al Nahyan, but also of renowned poets who helped to keep Nabati poetry alive – an ancient and increasingly popular form of Arabic poetry. The Festival celebrates their work while also reviving legendary characters from Arabic folktales for a new generation through interactive installations.

Through a transformed programme spanning literature, performance, music, film and sport, AABF invites visitors of all ages and interests to rediscover the joys of reading.

The majestic Qasr Al Muwaiji located in central Al Ain will present a series of daily Arabic-language poetry evenings celebrating eleven renowned poets from the city who transformed Nabati poems into songs. The public can learn about each of the poets and hear beautiful recitals by leading creatives and scholars from across the UAE, as well as renditions by well-known Arab singers.

As well as activities for all the family, visitors will discover the all-important showcase of publishers from across the Arab world at the Stadium.

Experience the cultures of different peoples through live musical performances by the likes of Emirati and Omani folk bands, African drummers, Egyptian Tannoura dancers and more.

Professional sculptors will showcase their work, offering budding artists the chance to ask them questions and learn about their experiences. Look out for the internationally acclaimed Lebanese artist Bassam Kyrillos, among the Arab artists exhibiting. The corner also includes free drawing workshops for children aged 8-12 years.

A wonderful range of activities combining learning and fun will inspire children to create and innovate, from storytelling to scientific and artistic workshops, music sessions to challenges and competitions.

A programme for children and teens integrates culture and technology, offering unique experience in the worlds of metaverse. Enjoy reading stories, playing with robots, and an AI ​​workshop.

For Arabic speakers, a compelling programme of seminars and workshops will take place each morning at the United Arab Emirates University and every evening at Bait Mohammed bin Khalifa featuring authors and artists as well as cultural and civic leaders.

At the University, panel discussions focus on creative topics ranging from non-commercial Arab cinema to Emirati Children’s Literature, while the Bait Mohammed bin Khalifa is hosting seminars on wide-ranging issues such as female role models and sustainable innovation.

On 15 November an Award Ceremony for the new international poetry prize, ‘Kanz Al Jeel’ or The Treasured Sayings Award will take place at the Zayed Central Library, with the winners.

On 18 November the UAE University in Al Ain will host a special event to sign a memorandum between the ALC and UAE University. The two organisations are committed to collaborate on a range of vibrant cultural and educational projects that promote the Arabic language.

The Abu Dhabi Arabic Language Centre is leading the organisation of the multi-site event with the support of its partners including its strategic partners,  the Al Ain Club and United Arab Emirates University, media partner the Abu Dhabi Media Company, and logistics sponsor, Tawzea Distribution and Logistics Services.