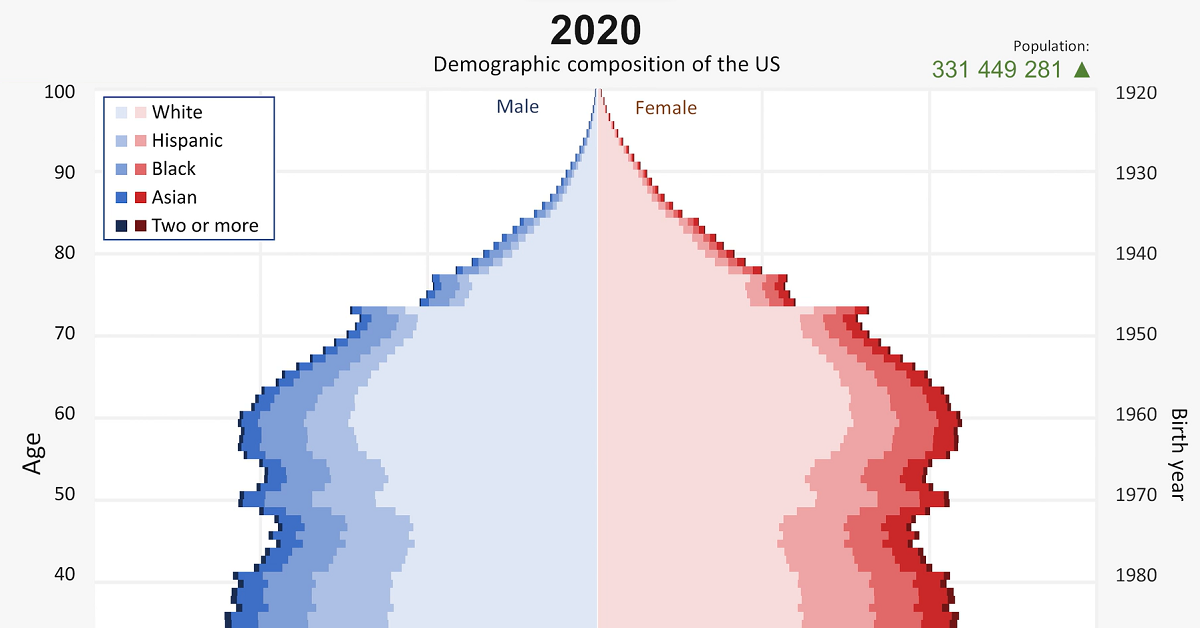 The United States has famously been called a melting pot, due its demographic makeup of various cultures, races, religions, and languages. But what shape does that mixture take? And how has it changed over time?

Beginning over 100 years ago, this video from Kaj Tallungs assesses how America’s demographics have changed from 1901 to 2020. It uses data from multiple sources including the U.S. Census Bureau, the National Center for Health Statistics, and the Human Mortality Database.

A Look at the Total Population

And the U.S. has continued to add to its population totals. Here’s a brief look at at the population in 2021 by regional breakdowns:

And here’s a glance at how some of the population shakes out, across the top 10 most populous states in the country:

Diving a little deeper, the country’s demographic breakdowns have also changed significantly over the last 100+ years. While the share of men and women is an obvious near-even split, age and race distributions have changed drastically.

For starters, though birth rates have remained fairly strong in the U.S., they have been slowing over time. This is similar to many other Western countries, and can eventually result in a larger share of elderly people as well as an increased financial cost of subsidizing their care. Additionally, fewer births results in a depleting workforce as the young population shrinks.

The shares of Black, Asian, Hispanic, and people of two or more races have also been growing. In fact, between 2010–2020 the population of people identifying as two races or more increased by a whopping 276%.

Here’s a glance at some of the other demographic growth rates over the 2010-2020 period:

Like many countries, a “graying” of the population will become a concern in the United States.

True to the melting pot moniker, America’s demographics will continue to change dramatically over the coming decades.