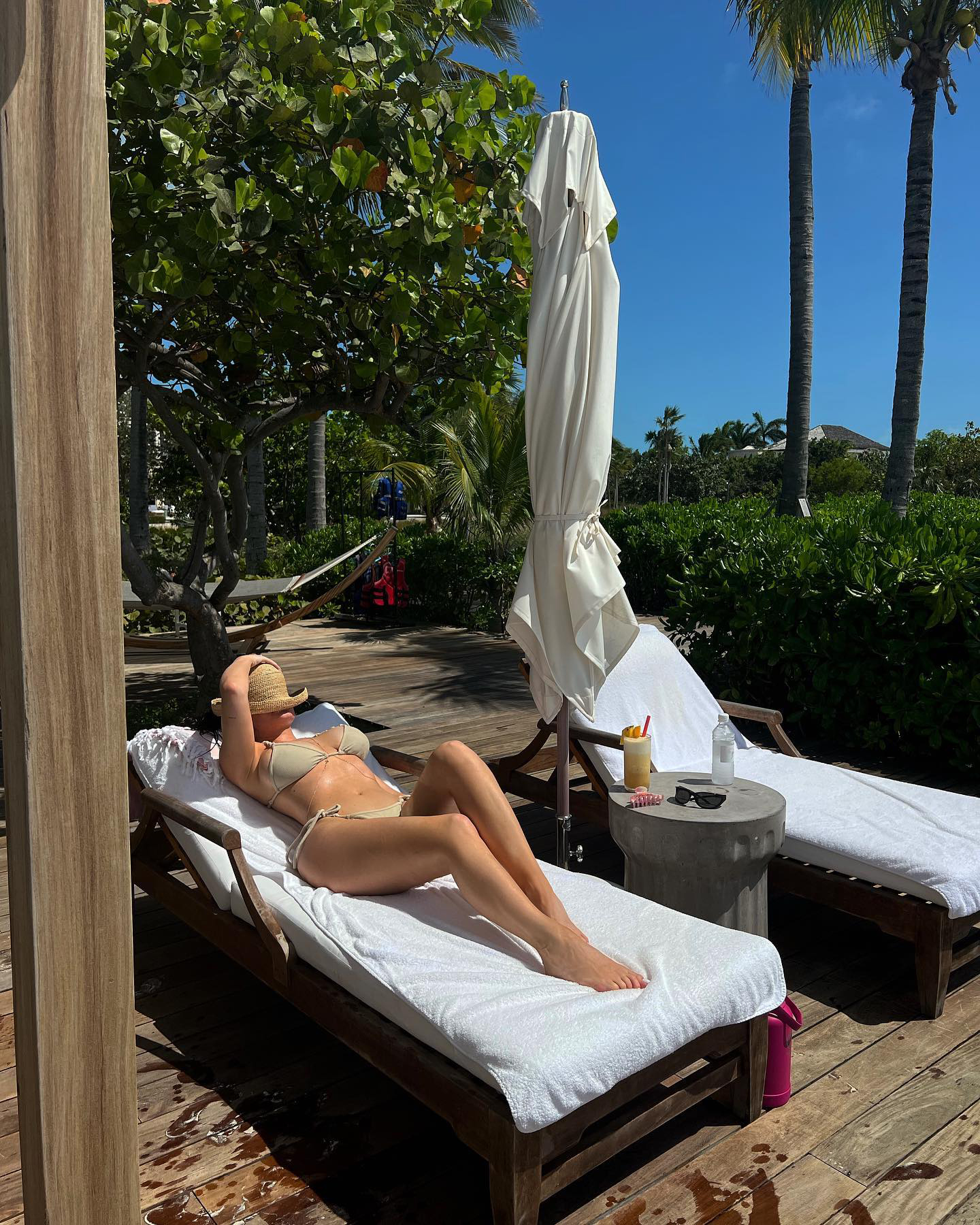 Hello, abs! Kylie Jenner has been candid about her postpartum body changes since welcoming her second child, and now she’s flaunting her progress.

“Piña colada please,” the Kylie Baby founder, 24, captioned a Saturday, May 7, Instagram photo as she laid on an outdoor lounger wearing a beige-colored bikini and a straw hat to cover her face. In a second snap, Jenner held a glass with a fruity cocktail.

The Kendall + Kylie designer and her boyfriend, Travis Scott, jetted off to Turks and Caicos earlier this week for a romantic getaway. The beauty mogul showcased their travels via her social media, revealing the pair — and their 4-year-old daughter Stormi — spent time on the beach, swam and met local iguanas.

The family of four’s beach vacation comes nearly three months after the Kardashians star gave birth to her son in February.

“Stormi has been helping out and is so excited about being a big sister,” a source exclusively told Us Weekly shortly after the little one was born, noting that Jenner, the 31-year-old rapper and Stormi have “all been non-stop smiling” since his arrival.

The reality TV personality and the “Highest in the Room” performer initially named their baby boy Wolf Jacques Webster, before eventually changing his name. Jenner has yet to reveal her son’s new moniker or share a photo of his face, though has been candid about her own postpartum struggles.

“I just want to say to my postpartum moms that postpartum has not been easy,” the California native — who welcomed Stormi in February 2018 — explained in a March Instagram Story. “It’s very hard. It’s not easy, mentally, physically, spiritually, it’s just crazy. I didn’t want to just get back to life without saying that because … for other moms going through it right now, I think we can go on the internet and it might look a lot easier for other people and put the pressure on us, but it hasn’t been easy for me either.”

She added: “It’s been hard. I didn’t even think I’d make it to this workout today but I’m here and I’m feeling better. … I realized that I was putting some pressure on myself, and I just keep reminding myself I made a whole human, a beautiful healthy boy. We have to stop putting pressure on ourselves to be back, not even physically just mentally, after birth.”

The Life of Kylie alum has continued to document her weight loss journey and workout regimen via social media. Last month, Jenner revealed she already lost 40 pounds after gaining 60 pounds during her pregnancy. She wrote via Instagram Story that she was “just trying to be healthy and patient.”

0 comments on “Back at It! Kylie Jenner Shows Off Abs in Bikini Pic 3 Months Postpartum”