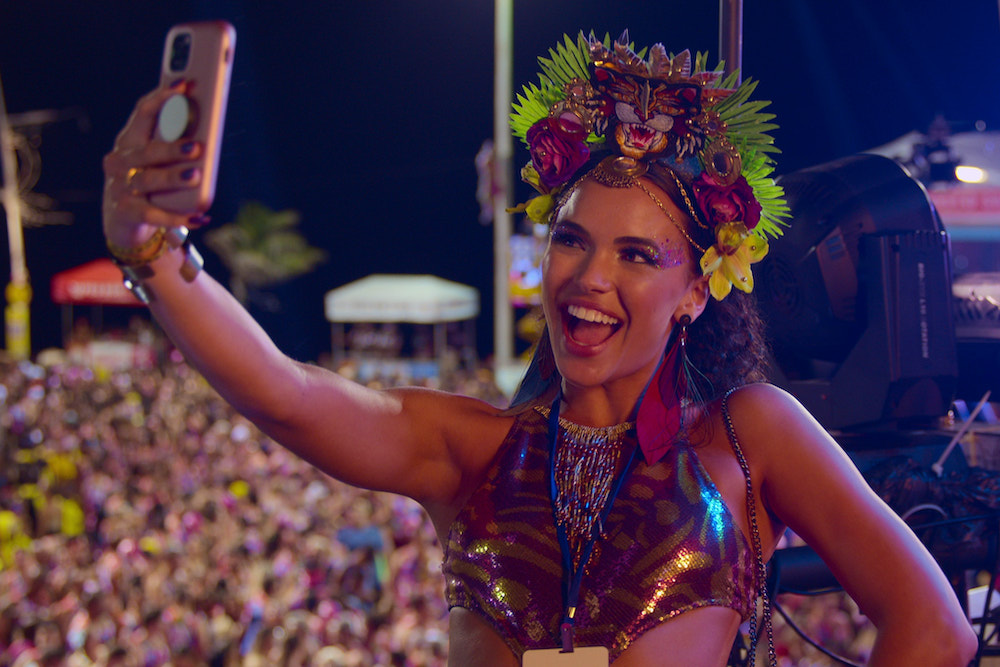 Netflix’s party-minded “Carnaval” has a lot on its plate, tackling everything from influencers, the toxic nature of their business and the complexities of making and maintaining female friendships in that industry. Set against the revelry and pageantry of Brazil’s Carnival celebration, director Leandro Neri’s lighthearted romantic comedy delivers hijinks and a few sweet sentiments about having the courage to embrace destiny. Nevertheless, its broad comedy and thoughtful themes aren’t completely cogent, due to a lack of properly motivated character developments and questionable scenarios.

The same day her friends Mayra (Bruna Inocencio), Vivi (Samya Pascotto) and Michelle (Gessica Kayane) rally to lift her spirits, she gets an exciting career opportunity to join hunky pop sensation Freddy Nunes (Micael) and fellow influencers for Carnival at an all-inclusive resort in Salvador, Brazil. She negotiates for her gal pals to tag along, and off they go. Nina, hungry for digital engagement, is certain this trip will get her to her goal of a million followers. Trouble is, their adventure gets off to a rocky start.

Because Nina’s numbers are significantly lower than other invitees, the gals have been booked at lower scale accommodations, meaning they ride in a cheesy tourist van in lieu of a private luxury vehicle and stay at a dingy motel instead of a posh hotel. Their dorky tour guides, Salvador (Jean Pedro) and Samir (Rafael Medrado), aren’t the beefcakes advertised either. Not exactly the VIP experience they were pitched.

Yet for all the impediments they eventually surmount thanks to their scrappy sensibilities, other interpersonal squabbles arise, threatening to erode the gals’ foundational friendships forever. Nina forgoes time with her friends for time spent with Freddy, whose follower count is music to her ears. She also ditches her pals based on bad advice from her antagonistic influencer idol, Luana (Flavia Pavanelli), whose perfection extends from her glamourous wardrobe to her philanthropic efforts.

The movie’s strengths lie in its bouncy, breezy, exhilarating energy, capturing the colorful flavors of the culture, community and atmosphere. Neri marries the sound of Samba music to cinema with aesthetic panache, concocting a delightfully infectious rhythm. Montages spotlighting party-goers’ vibrant enthusiasm and god-like beauty give the narrative a second and third wind when the dramatics go stale. The sequence highlighting the ladies’ tour of the town offers vicarious escapism for viewers housebound by the coronavirus — but tone-deaf to the country’s own out-of-control case count. Leads Cordeiro, Inocencio, Kayane and Pascotto (whose dialogue is occasionally punctuated with an 8-bit noise stinger to emphasize her character’s whimsical yearnings) keenly roll with the campy overtones as adeptly as they bring out deeper undertones within the friendship dynamic displayed.

Though the four main characters are caught in a few interesting, albeit superficial, predicaments, few of them land sufficiently. Neri, along with co-screenwriters Audemir Lezinger and Luísa Mascarenhas, make the group feel like one-dimensional archetypes used solely for plot mechanics. Individually, they’re given struggles: Nina wrestles with a life-altering decision to put her heart over her head. Indecisive Mayra deals with crippling bouts of anxiety. Nerdy Vivi questions if dating a hot nerdy guy is right for her. Sexually liberated Michelle learns the difference between love and lust. However, there’s little deep resonance to their dilemmas despite the potential.

When Nina is forced to reckon with her obsession with Instagram, the filmmakers back away from holding her accountable. Her friends aren’t exactly saints either. They come across as jerks, not heroes, whenever they encourage her to blow off work, subsequently resenting her when she doesn’t. Resolutions are unfortunately slight, undercutting the overarching thematic sentiments. It might have been more poignant if all the women had taken charge and embraced their agency, rather than accept passive roles in their stories.

While Myra and Vivi are given avenues to demonstrably overcome their fear-based internal conflicts, Nina and Michelle’s problems involve fate deciding for them — from which boy to choose, to Luana’s contrived comeuppance. Nina’s unhealthy fixation on her follower count is never genuinely challenged in a meaningful manner beyond a few friendly arguments that lack in sincerity and conflict resolution. One minute they’re locked in an intense argument and the next they’ve breezed right past it. The film’s spin on the genre’s traditional love triangle trope sacrifices Nina’s empowerment. Plus the clever wrap on the mystery of Michelle’s romantic befuddlement comes at a cost to her bare-bones character development.

With its glaring faults, “Carnaval” hews closer to the abysmal annoyances prevalent in “Desperados” than the remarkable wit of “Ibiza” — a.k.a. Netflix’s previous female-centric comedies featuring women experiencing life-changing travails while traveling. This triptych of sorts portends that similar content will be in the pipeline at the streamer. We might as well surrender to our inevitable fate, as these characters learn to do.