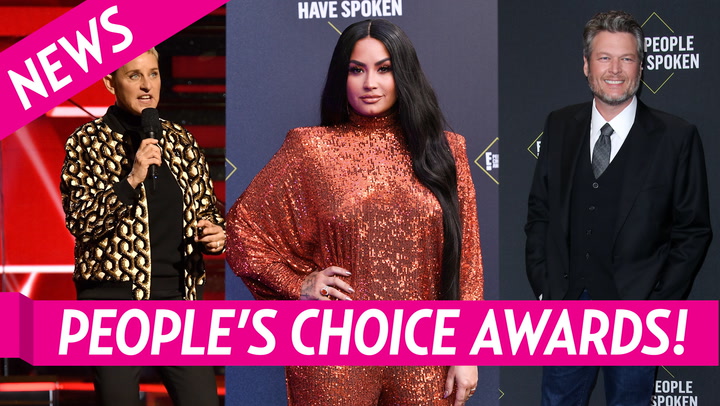 The people have spoken! The 2021 People’s Choice Awards will be bringing a lot of star power to Santa Monica, California — and will be honoring the biggest celebrities of the year.

The event, which airs on E! Tuesday, December 7, from the Barker Hangar in California, is the only awards show completely voted on by the fans. With 40 different categories ranging from TV and movies to music and pop culture, the PCAs are sure to have something for everyone.

Kenan Thompson, who is this year’s master of ceremonies, shared his excitement about joining the show last month.

“I can’t believe I get to host the PCAs! I’m beyond blessed to be nominated twice and part of two more nominations for SNL,” he said in a statement. “Good times indeed. Congrats to all the nominees — we already won!”

The Kenan and Kel alum, 43, later revealed why he’s excited to see Halle Berry accept the People’s Icon Award during the show.

“I think it’s going to be Halle Berry’s night. It’s such an iconic award that she’s winning, and it’s being presented by Cardi B, so that’s a lot of high energy already,” Thompson told E! News on Monday, December 6.

Dwayne Johnson is also being honored during the evening as the 2021 People’s Champion Award recipient.

“The Rock, of course, it’s always cool for him to be [anywhere]. The king is in the building, nobody is surprised,” Thompson said of the Red Notice star, 49, noting he is a very fun guy to have at any event. “But that’s a major thing, he’s the highest paid movie star in the world and he’s going to be in the same room as us. It’s going to be fun.”

Christina Aguilera is making People’s Choice Awards history with her Music Icon Award win. (It’s the first time the award will be given out.)

“There is a reason Christina Aguilera is referred to as ‘the voice of our generation.’ She not only has an extraordinary voice, but as a creator, produces music that evokes true emotion and resonates across so many different demographics,” Entertainment Live Events, Specials & E! News, NBCUniversal Entertainment Television and Streaming Executive Vice President Jean Neal said in a statement earlier this month. “Christina is an idol and we cannot wait to celebrate her successes and present her with the inaugural Music Icon award.”

Kim Kardashian rounds out the top honors for the night with her Fashion Icon Award. When it comes to the regular categories, Justin Bieber leads the pack with 10 nominations. Scarlett Johansson and Florence Pugh each earned six nominations.

Scroll down to get all the details about the 2021 People’s Choice Awards: