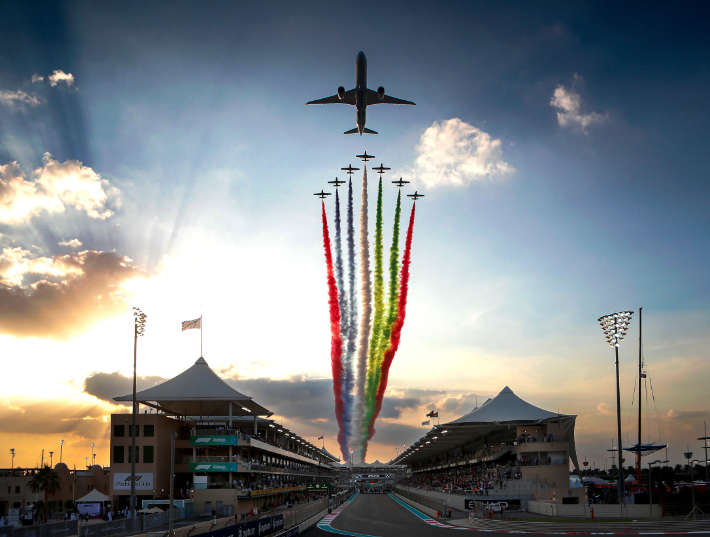 Argentinian-born photographer Jorge Ferrari has lived in the UAE for more than 30 years. During that time, he and his team have been capturing some of Yas Marina Circuit’s most memorable moments – both local, smaller scale portraits of Abu Dhabi Grand Prix weekend as well as the big moments that made a splash on the global stage.

He reveals that when he first started covering race weekend in 2010, it was different to how he operates now. “For the first two years I was the only photographer contracted by Yas Marina Circuit to cover everything outside the Paddock, and honestly, when I think back, I’m not sure how I managed to complete the brief,” he laughs.

“I do remember always being on the run, not having time for anything, eating and drinking on the go, moving from Fan Zones to Grandstands, to VIP functions, and hospitality suites, taking photos of cars and drivers, zooming along with my golf cart (which I lost on the second day), and since 2011, on my customised scooter,” adds Ferrari.

In the last 13 years, the event has grown, and so has the demand for photography coverage.

From his time covering the event, Ferrari has selected five standout images taken by him, or one of his team members, with each telling a different element of the Abu Dhabi Grand Prix story.

Taking place minutes before the race, the Etihad Airways fly-past over the circuit start line is “an iconic image that represents the moment fans all over the world have been waiting for: the last race of the F1 season”, says Ferrari. He chose this particular image (taken in 2021) because if he could choose only one shot that tells the story of the Abu Dhabi Grand Prix, it would be this. It was one he and the team had been trying to capture for ages, but it was logistically difficult on the ground because of the limited time to get around the tightly controlled pit lane. However, the final shot by Mauricio Ramos was definitely worth all the effort.

Having beaten his seemingly unstoppable Mercedes teammate, Lewis Hamilton, to the 2016 F1 World Drivers’ Championship title, despite a second-place finish at Yas Marina Circuit, Nico Rosberg did a few celebratory donuts in front of the crowd, and leapt from his car in triumph. Charles Verghese was there to take the shot. He says they had planned in advance to cover good positions overlooking the track in case of any magic moments – and it was a perfect ‘right place, right time moment’ and one that reminds him of Rosberg’s shock decision to retire following the season finale in Abu Dhabi.

A real crowd favourite every year, the Saturday and Sunday displays by the UAE’s national aerobatic team, Al Fursan Al Emarat, always make for an arresting visual experience.  Jorge Ferrari chose this image because not only did it take a great deal of pre-event planning based on his wide experience, but also because: “I wanted to show that the Abu Dhabi Grand Prix is not just a fantastic sporting event but also a great day out to enjoy with friends and family, with top entertainment.”

With the Abu Dhabi Grand Prix’s focus on fan experience and entertainment, Ferrari wanted to include this crowd shot taken in one of the Oasis Areas fan zones during the 2018 race weekend. The image, taken by Charles Verghese, “nicely represents the fan areas during the event and has a happy, colourful vibe.”

What better way to round up a visual retrospective of the Abu Dhabi Grand Prix than a picture that evokes the magic and madness of the F1 season finale? “It is a fitting end to the biggest event of the year in the UAE, and a culmination of so many hours, days, weeks and months of planning and work. Plus, when this shot is edited, approved and distributed, it means I can enjoy the party too,” laughs Ferrari.

The post F1 LIFE THROUGH A LENS… first appeared on Abu Dhabi Blog.