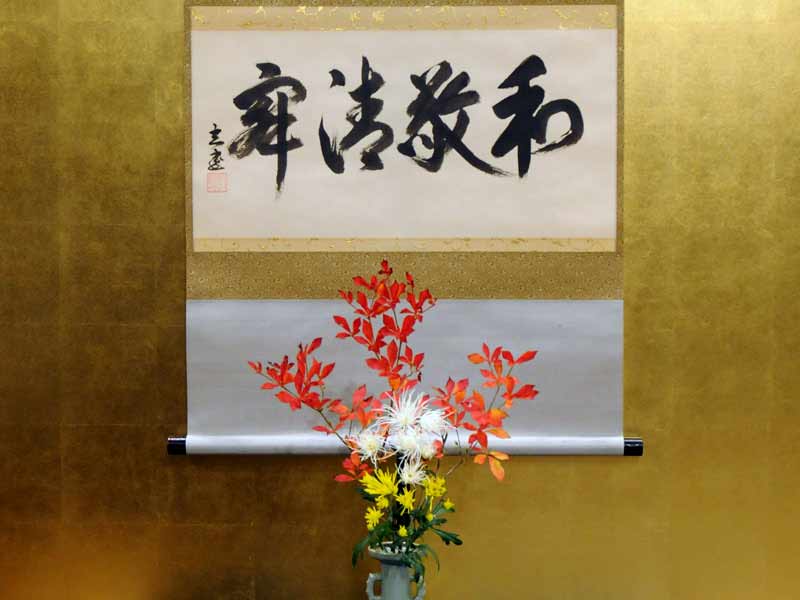 Urasenke Tea Ceremony Abu Dhabi Study Group and Ohara School of Ikebana UAE Chapter co-hosted the first workshop by Emiratis who are passionately learning Japanese traditional arts, Tea Ceremony and Ikebana, in Arabic.  This workshop was a part of the commemorative events for the 50th anniversary of the establishing diplomatic relations between Japan and the United Arab Emirates in 2022. The workshop took place at the Cultural Foundation on 13th of November 2022.

Tea ceremony, also known in Japanese as Chado and Ikebana, also known as kadō or “the way of the flower”, are two of the practices considered to be a Japanese “dō”, meaning “path” or “way of living”. These practices are a fundamental part of Japanese artistic culture, derived from Zen Buddhism and guiding the Japanese aesthetic sense and character.

Chado, The Way of Tea revert to the 16th century. Chado core elements are Wa– harmony, Kei– respect, Sei- purity, and Jaku– tranquility. The Way of Tea conceals its practitioners from the worldly impurities inside an “an” which is a tea hut where Chado is done; leaving all life hurdles behind.

The history of ikebana, the Japanese art of flower arrangement, dates back 600 years and focuses on simplicity, asymmetrical beauty and seasonal materials. The emphasis on the Japanese aesthetic of “empty” space distinguishes ikebana from flower arranging practiced in other parts of the world.

Total 7 Emiratis participated in the workshop. The first part was Chado, where a brief introduction about the history of Urasenke, Chado, and Urasenke Abu Dhabi was delivered. Shortly, “Hakobi Usucha Otemae” was demonstrated in front of the participants by Ms. Faiza Almubarki and Ms. Fatima Alsuwaidi. Afterwards, “Bonryaku” procedure which is basic was explained to the participants and actually step by step done by the participants with the assistance of the Chado Emirati members, Ms. Fatima Alsuwaidi, Ms. Faiza Almubarki, Ms. Salama Alrumaithi, and Ms.Laila Alnuaimi.

At the second part, participants learned Rising From, the first basic form all the Ikebana learners learn at the beginning of the path. Ms. Amani Alshehhi, is the first United Arab Emirates national to obtain the certification of Ikebana Instructor from the Ohara School Japan did the demonstration first, followed by the hands-on creation by the participants.

The ambassador of Japan in the United Arab Emirates, H.E. Akio Isomata and the spouse visited the workshop and welcomed the participants and highly commended their interest in Japanese culture, stating that this is a very unique event that further develops cultural understanding between Japan and UAE.

Ms.Faiza and Ms.Fatima, says, “Being appointed for such an event that puts the light on the Japanese cultural aspects and facets by Emirati admirers, has put a lot of contentment in our hearts. We hide you not that it was an immense responsibility since we carry sincere respect for Japanese tradition, yet, under the guidance of our teachers and through practice and commitment, we have achieved this step. This event not only reflects the Emirati Japanese strong bonds, but also, it manifests the trust granted by the deep-rooted Japanese entities such as Urasenke school and Ohara School of Ikebana to the Emirati youth. We, as tea practitioners, aspire to learn adequately to represent and strengthen the Emirati Japanese relationships”.