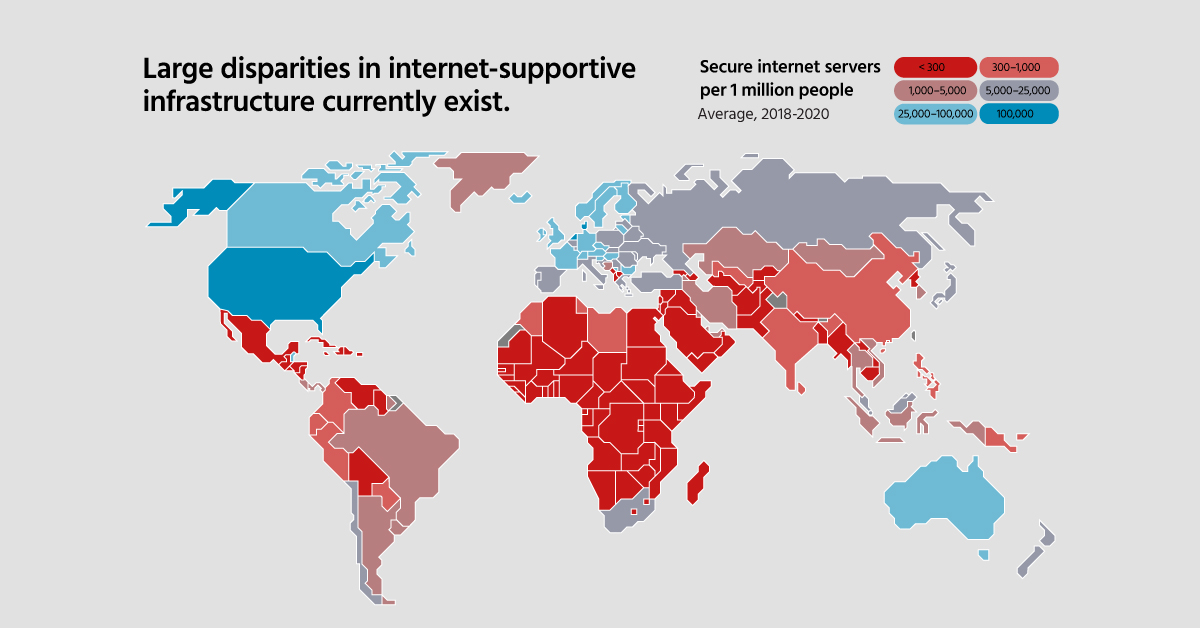 Since its creation, the internet has vastly expanded sociopolitical and economic development around the world. This is largely attributed to the its ability to facilitate communications, data sharing, and commerce on a truly global scale.

Unfortunately, a free and open internet will not always be guaranteed. Fragmentation between rival nations is growing, and it threatens to split the digital economy into silos.

In Part 3 of The Global Trade Series from the Hinrich Foundation, we examine the current state of digital fragmentation and its implications on the world.

These technologies have the potential to improve income levels and quality of life, but they could also worsen global inequality. This is because of a major gap in internet-supportive infrastructure, as illustrated in the infographic.

To get a sense of this gap, consider the following numbers.

Secure internet servers are the basis of protected communications on the internet. Without them, countries are likely to face difficulty in attracting foreign trade and investment.

Many of the world’s largest economies are making fragmentation worse by erecting barriers between their national digital sectors. Using data from Digital Policy Alert, we can track state interventions by policy area.

Data governance refers to any policies that affect our ability to access or share data. This includes data localization measures, which can hamper digital services from foreign companies. See the table below for the number of policy changes by country, from between January 2018 to September 2022.

A recent example of content moderation is China’s campaign to cleanse its local internet of “rumours and false information”. Given the ambiguity of the term “false information”, this initiative could lead to political censorship.

In a further display of state intervention, leading economies have been engaged in a decade-long subsidy race to create advantages for their digital sectors.

Subsidies are a form of discrimination in a nation’s trade and investment regulation, and may dissuade potential entrants from participating in its market. Of course, only wealthier governments can play the subsidy game, which is why the majority are attributed to the U.S., China, and the EU.

While American subsidies to the digital sector actually declined during the 2010s, the CHIPS and Science Act of 2022 marks a renewed focus on nurturing domestic industries. More specifically, $280 billion is being allocated over the coming years to “develop onshore domestic manufacturing of semiconductors critical to U.S. competitiveness and national security”.

At its inception, the internet was intended to be a globally unifying medium. This vision is known as an “open internet” where two parties, regardless of location, are able to exchange data.

Unfortunately, due to state interventions, the internet is now at risk of fragmenting along national jurisdiction lines.

Without a global playbook to guide policymakers, these interventions are likely to intensify digital fragmentation. This denies users choice, stifles innovation, and exacerbates trade tensions.

This infographic was based on a Digital Policy Alert and Global Trade Alert joint report on digital fragmentation, sponsored by the Hinrich Foundation. Download it here now.

0 comments on “Global Trade Series: Fragmentation in the Digital Economy”