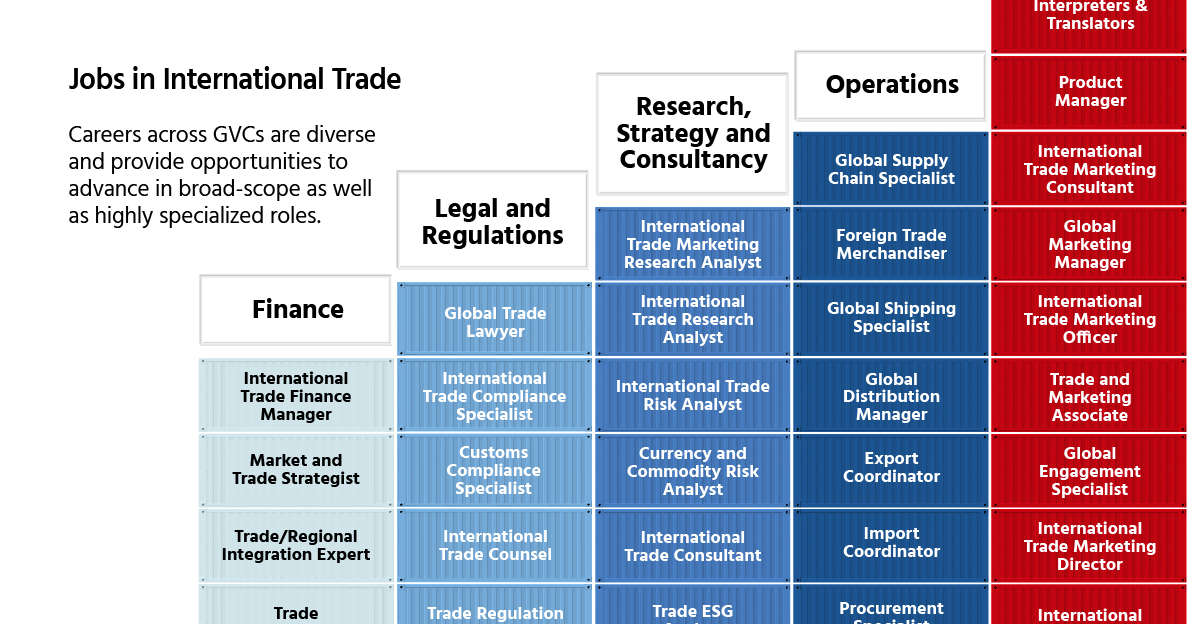 The growth of global trade is causing a mass geographical redistribution of workforces.

This is creating employment everywhere it goes and grows, according to the OECD. So how can this redistribution and growth be utilized to launch a successful career?

In the above infographic from The Hinrich Foundation, we explore the massive explosion of career opportunities in international trade. To start, let’s dive into the inner workings of global trade.

Trading across borders is a complex process, especially when two or more countries are involved. This is called a Global Value Chain (GVC) and it enables more than half of the world’s international trade.

Here is a visualization of the trade routes of cargo ships across oceans. Note that while this data is from 2012, it is purely intended to demonstrate the complex nature of global trade.

GVCs require a chain of people working throughout the trade route of all internationally exchanged goods and services.

According to the OECD, a country’s ability to benefit from GVCs depends on how much it invests in the skills and education of their citizens.

Understanding the Landscape of Global Trade

For those considering pursuing a career in trade, it can help to look at the landscape of global trade and how the situation is evolving over time. This way, they can envision what opportunities will be available for them when they graduate.

According to IMF, Asian regions have dominated growth in the market. Central and South Asia will have the highest export growth from 2021 to 2026. ASEAN will be importing the most goods and services in the same time period. Here is what the world looks like in exports:

But growth on its own is not enough to show where the potential for lucrative careers is the highest. For example, China’s growth rate in 2021-2026 (expected) will slow down compared to 2016-2021. But it remains one of the biggest trading hubs in the world, along with Germany and the United States.

Another deciding factor that can help people understand the scope of their future careers is what roles are the most in demand.

According to research, the most in-demand job in global trade is an International Trade Finance Manager. An ITF manager makes import and export deals between parties, secures financing from banks and, in complex deals, creates special structures to integrate products.

This is an ideal job for those looking for international exposure, travel and decent salaries without burning out.

Another sought-after job is in trade research and analysis. Research Analysts will be among the most wanted professionals in the next few years, and it is no different for researchers in trade. It is also one of the highest-paying jobs in the field. For example, salaries in 2022 were estimated to reach $135,000 annually.

Traders looking for bigger paychecks can also consider working as an International Business Development Professional. In 2022, they have been earning up to $200,000, according to Zippia.

But it’s important to note that this value is a conversion of salaries given in different currencies, with vastly different values, in areas with diverse living costs.

For example, $60,000 would be a conservative salary in Iceland. However, in Greece, with an average annual salary of $26,000, it would be a more generous number. This is because the currency conversion allows the earner to afford a high-quality life.

This information comes from the Trade Careers Index launched by The Hinrich Foundation and QS. It is a set of rankings for institutes offering master’s degrees in global trade.

>>>Interested in a career in international trade? Click here to explore the International Trade Rankings, the first ever ranking of master’s trade programs globally.

0 comments on “Interested in a Career in Global Trade?”