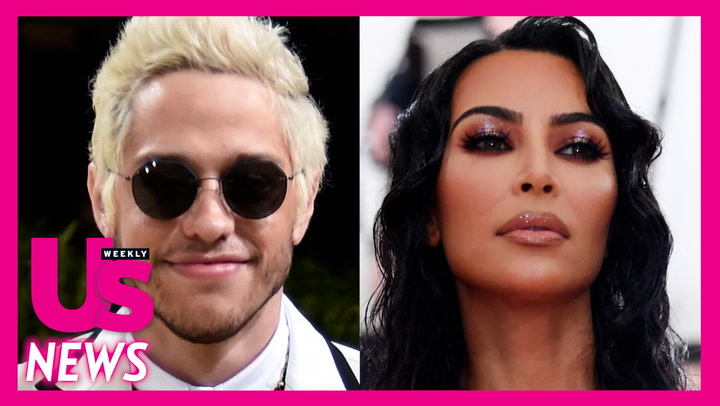 Wish you were here! Kim Kardashian gave her fans a peek at her quick vacation to the Bahamas with Pete Davidson.

The reality star, 41, posted multiple Instagram Story photos and videos from the trip on Friday, January 7. The shots mostly showed off the picturesque beach, but there were a few fun things that could be spotted in the pics, including a pig running in the sand and a massive water slide sitting in the middle of the ocean.

Kardashian and Davidson, 28, were seen boarding a private jet on Monday, January 3, and getting off of a boat in the Bahamas on Wednesday, January 5. She turned heads on Thursday, January 6, when she shared a bikini selfie captioned, “Sweet sweet fantasy baby.” Later that day, the pair were spotted arriving back in Los Angeles after the whirlwind trip.

“Kim and Pete wanted to spend this time together because they’re both going to be working a lot during the coming months,” a source told Us Weekly earlier this week. “Pete will be filming, and Kim is launching some new products, so they’ll still be able to see each other, but this is the last time they’ll be able to spend a lot of quality time together for a few months.”

Kardashian and Davidson enjoyed time by the pool, embarked on boat rides and took a break from the real world during the getaway.

“Kim is so relaxed right now,” the insider added. “Her divorce was a very tough time and now her life is brighter.”

The KKW Beauty founder filed for divorce from Kanye West in February 2021 after six years of marriage. They are parents of daughter North, 8, son Saint, 6, daughter Chicago, 3, and son Psalm, 2.

Following the split, the Skims founder moved on with Davidson in October 2021. A source told Us in December 2021 that the duo were “getting serious” and “things have definitely escalated quickly but in a healthy, fun way.”

The insider added, “Right now, they are just enjoying their time together and seeing where things go.”

While Kardashian did not “want to rush into anything too serious” with the Saturday Night Live star, she was enjoying the “early stages” of their relationship.

Amid the growing connection between the two, a source confirmed to Us earlier this month that Davidson “bonded” with the aspiring lawyer’s family, adding, “Kim and Pete are very in sync right now. They’re very in step with each other and the relationship is easy. They’re getting closer and closer and are a really great pair.”

Scroll through the gallery below to see photos from the couple’s Bahamas vacation: