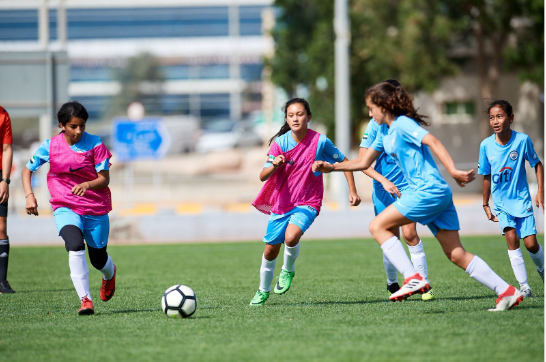 Youth football team sign-ups are now officially sold out for the return of Manchester City’s Abu Dhabi Cup next month.

Launched in 2017 with the aim of developing and inspiring young football players in the region, the youth tournament has grown in stature over the years and as it returns for its fourth edition for the first time since 2019, more than 130+ youth teams with 1,750 players from around the globe will compete in the tournament for their chance to lift the Abu Dhabi Cup and be crowned champions!

The Abu Dhabi Cup will be held over the weekend of 18-19 February from 8am-7pm at Zayed City Sports Stadium, an iconic landmark in Abu Dhabi and the largest multi-purpose sports venue in the UAE.

On top of the exciting football action, the ‘City Village’ will be open to the general public to come along and enjoy exclusive activities and live entertainment,including face painting, netball, freestyle performances and much more.

An exclusive, live screening of Manchester City’s away fixture against Nottingham Forest will take place on 18th February from 7pm, allowing fans to come together to support the English Champions.

This is also where fans will have the incredible opportunity to see the Premier League trophy in person, as well as have their photo taken with City mascots Moonbeam and Moonchester!

The iconic piece of silverware has been travelling the world to the US, Mexico, South Africa, Germany, South Korea and more as part of Manchester City’s global Trophy Tour to celebrate the club’s fourth title win in five years. The trophy will be making a special return to Abu Dhabi to mark the tournament and inspire players and spectators.

Full details for the screening will be announced shortly and fans can keep up to date at http://www.mancity.com and via the Club’s official social media channels.