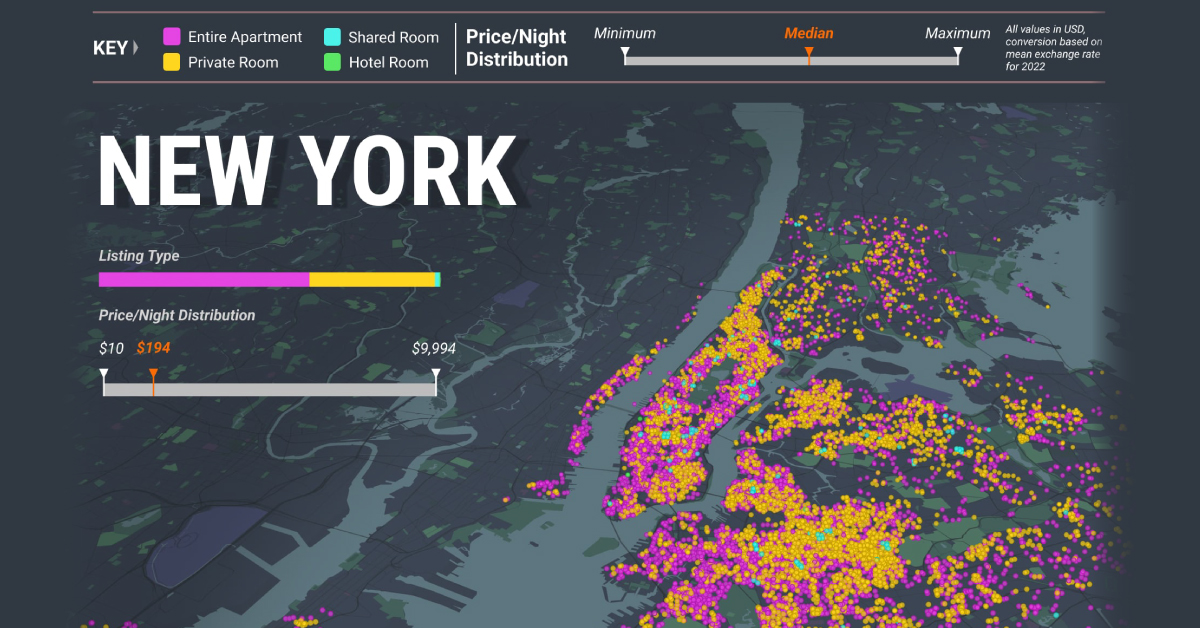 Since its inception in 2008, Airbnb has grown into one of the most popular travel and short-term accommodation apps on the market.

In 2021 alone, there were more than 300 million bookings (for both accommodation and experiences) made through the app.

To visualize just how massive the Airbnb landscape has become in major cities, this graphic by Preyash Shah shows every single listing in New York, London, and Paris.

To make this graphic, Shah used September 2022 data from insideairbnb.com, a website that pulls data directly from the Airbnb app. Once collected, the raw data was then cleaned to include active listings only fitting a few key parameters:

After scrubbing the data, each city’s immediate metro area was left with roughly 20,000 listings.

This is especially interesting considering that Paris has extremely strict regulations around short-term rentals and Airbnb usage, one being that an Airbnb rental must be someone’s primary residence.

In an act of desperation, they decided to set up and rent out a few air mattresses on the floor of their apartment to help pay their rent. Free breakfast was included with the stay, and after getting $80 a night for each mattress, Chesky and Gebbia knew they were onto something.

Yet, while Airbnb has shown great success over the last decade, it’s received its fair share of criticism from skeptics. Because of concerns over housing supply and price gouging, many cities have put restrictions around the use of Airbnb, or even outright banned the platform.

Like other technology companies, Airbnb has had a challenging year in the stock market. Once valued at $113 billion in 2021, the company is currently sitting closer to a $60 billion market capitalization today.

The post Mapped: A Snapshot of the Airbnb Landscape in Three Megacities appeared first on Visual Capitalist.

0 comments on “Mapped: A Snapshot of the Airbnb Landscape in Three Megacities”