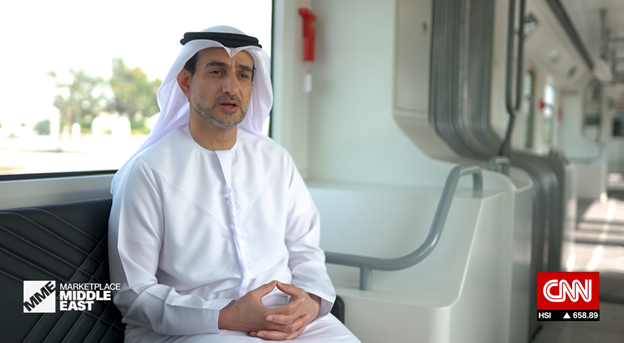 In the latest edition of Marketplace Middle East, CNN’s Eleni Giokos visits Abu Dhabi to learn more about how they are using artificial intelligence (AI) to diversify the economy.

The United Arab Emirates capital city is taking advantage of AI in areas from transportation, to logistics, to education. One study estimates that AI could contribute nearly 16 trillion dollars to the global economy by 2030. President Sheikh Mohamed Bin Zayed Al Nahyan seeks to tap into this potential in order to expand the economy and become a world leader in artificial intelligence.

The Mohamed Bin Zayed University of Artificial Intelligence (MBZUAI) which opened two years ago, is home to around 250 students and offers two-year master’s degrees and PhDs in fields such as machine learning.

The Department Chair of Computer Vision, Abdulmotaleb El Saddik, shares that the university is planning to use AI within medicine, “We are trying to help medical doctors not only to see in virtual reality what they are building but also to feel it, to touch it.”

This year is an important milestone for the university, with their very first graduation ceremony. It is equally as important for the UAE’s economy, as the school believes that AI could contribute as much as $320 billion dollars to the region’s economy by 2030.

The president of MBZUAI, Eric Xing, describes AI as “a new discipline”, and a “foundational technique that is impacting all areas in economy either indirectly or directly.” He explains, “It is new discipline that kind of creates a levelled playing field, where we here as a new economy, actually have a certain advantage that other countries do not have. For example, there is a huge demand here, and also a very receptive population of new technology. There are great capitals here that are willing to invest on that.”

CNN also explores the autonomous vehicles that helped Formula 1 fans get to and from the racetrack at the Abu Dhabi Grand Prix this November. Abdulla Al Shamsi is the COO of Bayanat, a geospatial intelligence firm in Abu Dhabi, which tests these moving ‘robots’. Although they are designed and manufactured overseas, it is Abu Dhabi that provide the AI software.

“This project consists of three automatic rapid transit vehicles, six mini or robot buses and eight robot taxis. Our core is geospatial data. We are building the 3D map, so the car itself will understand where it’s moving,” Abdulla says.

Bayanat is a subsidiary of G4, a company backed by the UAE sovereign wealth fund Mubadala. Their aim is to improve efficiency on the roads with autonomous electric vehicles.

“We need to make sure that we are helping or contributing toward making sure that our environment is safe. We are reducing the carbon emissions from the street itself. Seeing more smart mobility for sure will mean that we will have less accident on this region.”