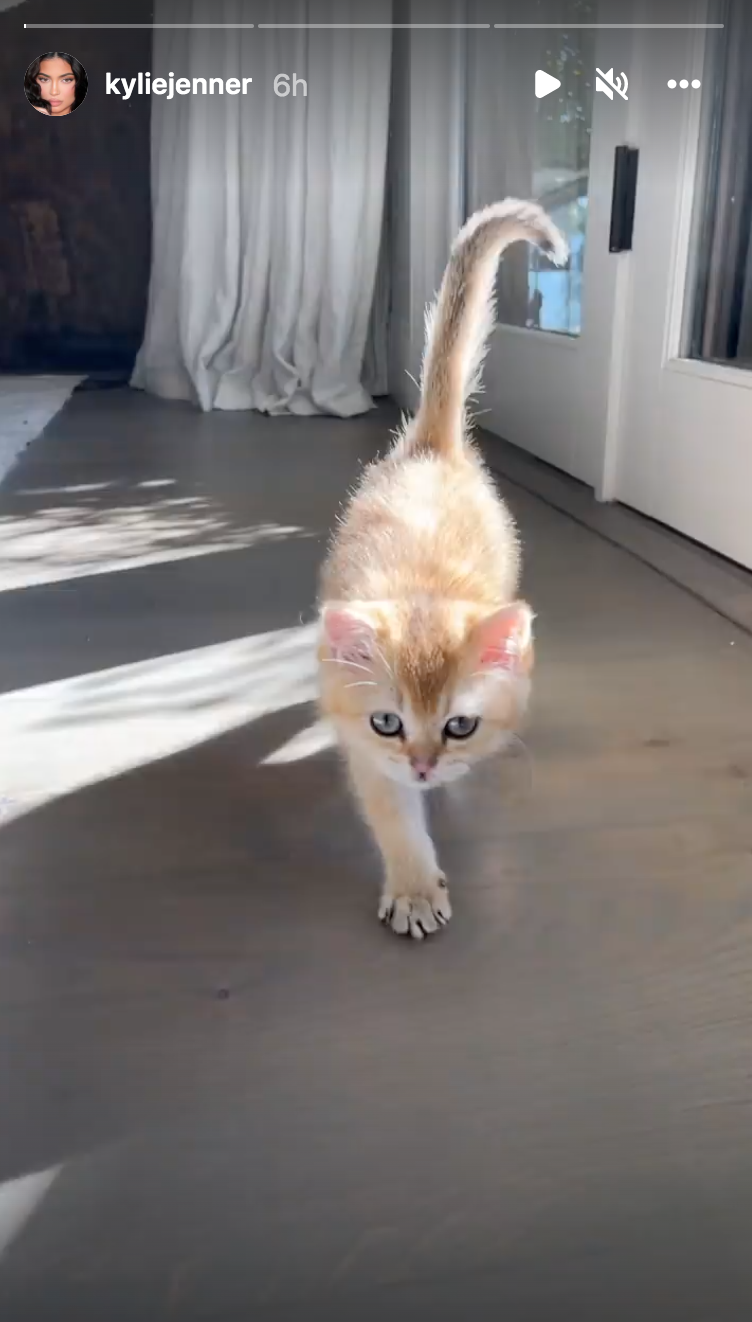 A Christmas cat! Kylie Jenner showed off her family’s newest addition, a kitten, on Saturday, December 25.

The Kylie Cosmetics founder, 24, didn’t share any captions, simply showing a ginger cat pawing at her baby bump on Christmas via her Instagram Story. Before showing the feline on her belly in the boomerang, she shared a photo of her and daughter Stormi, 3, watching the Boston Celtics play a basketball game as they bonded with their new pet. The mom and daughter were wearing matching holiday pajamas with a festive gnome print, which Kendall Jenner was also spotted wearing on Christmas via the model’s Instagram Story.

In clips shared on Sunday, Kylie showed the small cat’s ginger fur in the sunlight as it walked towards the camera.

The kitten joins the Life of Kylie star’s animal-friendly home, which include dogs Norman, Bambi, Rosy, Harley and Kevin.

While animals outnumber people in the household right now, there will be another human joining the family soon. Kylie is expected to give birth around February to her and Travis Scott‘s second child.

“Kylie and Travis have been laying low at home together, getting final preparations together for the arrival of their baby,” an insider told Us Weekly earlier this month. “Travis has been very supportive the entirety of the pregnancy, but now he’s spending even more time with Kylie as a family.”

The beauty mogul is “really enjoying this time with her family right now,” the source said. “Kylie truly loves nothing more than being at home, running her business and hanging out with Stormi.”

The social media posts are a rarity for Kylie recently. The reality star has been quiet on Instagram since attending Astroworld, the music festival Scott, 30, headlined in November that ended with 10 deaths. A congressional oversight committee will investigate the tragedy.

“Travis and I are broken and devastated,” the Keeping Up With the Kardashians alum wrote in a statement shortly after the deadly event. “My thoughts and prayers are with all who lost their lives, were injured or affected in any way [sic] by yesterday’s events. And also for Travis, who I know cares deeply for his fans and the Houston community. … I am sending my deepest condolences to all the families during this difficult time and will be praying for the healing of everyone who has been impacted.”

Scott and Kylie have both been pretty quiet on social media since releasing their statements. The rapper has only done one interview since the event.

While the pregnant influencer has posted the occasional Story, which automatically deletes after 24 hours, Kylie shared her first Instagram post since Astroworld to her feed on Christmas. The snap was a throwback photo of her mom, Kris Jenner, celebrating Christmas several decades ago.