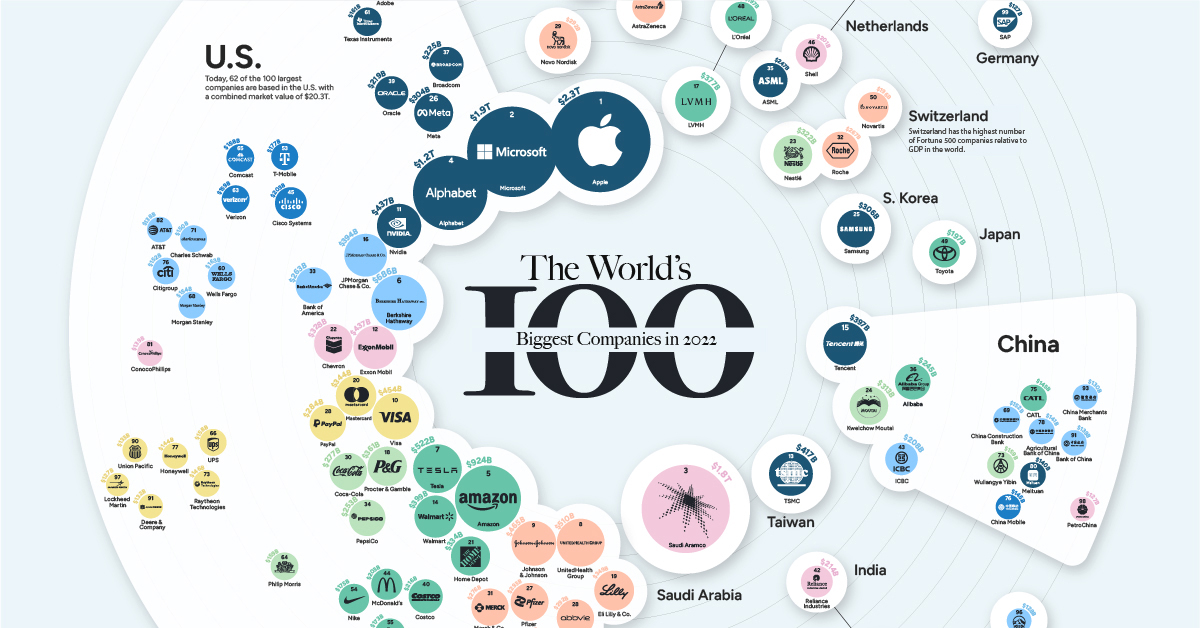 View the full-resolution version of this infographic.

The Biggest Companies in the World in 2022

View the high-resolution of the infographic by clicking here.

This year has been shaped by uncomfortable macroeconomic headwinds.

Taken together, many of the world’s largest companies experienced sharp declines in market share. Still, a few companies in key sectors had positive growth over the year.

As 2022 comes to a close, the above infographic shows the biggest companies in the world, using data from Companiesmarketcap.com.

The World’s Largest Public Companies in 2022

Today, Apple stands as the world’s most valuable company, towering at a $2.3 trillion valuation.

Despite the tech downturn of 2022—driven by rising interest rates and slower sales—Apple maintained its top spot. This was largely thanks to record revenues and healthy consumer demand for iPhones, which drive about half of its total revenue.

Following Apple is Microsoft. Unlike Apple, Microsoft has faced slower earnings over the year due to lower demand for personal computers and the weighing impact of a strong U.S. dollar. Overall, about 50% of the company’s sales take place overseas.

As we show below, there are now only four companies left in the trillion dollar market cap club.

Oil giant Saudi Aramco is the third largest publicly-traded company globally, at $1.8 trillion. It’s also the only non-U.S. company in the top 10.

In May, the state-run company briefly became the most valuable company on the planet as soaring energy prices boosted earnings. Saudia Arabia is the largest exporter of oil in the world, and the country’s economy is forecast to grow 7.6% in 2022—one of the fastest globally.

Overall, 62 companies of the 100 largest are headquartered in the U.S., 11 are based in China, and five are located in France.

For many of the world’s largest companies, 2022 was a brutal year for performance.

As the above graphic shows, the vast majority of the world’s titans saw their market values decline. Half of these companies saw double-digit drops.

Tesla has witnessed nearly 70% of its market cap being erased this year. Two main factors are behind this drop: falling demand, especially in China, and CEO Elon Musk’s volatile and risky acquisition of Twitter.

On the other hand, UnitedHealth Group has seen the strongest performance among the top 10.

The company, which rakes in a large share of its earnings from employer-backed insurance plans, said that recessionary impacts had not yet begun materializing in 2022.

Biggest Companies in the World, by Sector

Even with sinking market values across the sector in 2022, tech remains dominant.

Companies are classified according to the FTSE Russell Industry Classification Benchmark. *As of Dec 12, 2022.

Consumer discretionary and health care sectors fall next in line, with big players such as Amazon and Johnson & Johnson among their ranks.

At the other end of the spectrum is utilities, the smallest sector overall at least pertaining to the largest companies list. NextEra Energy, the sole utilities company among the rankings is one of the world’s largest developers of wind and solar energy. Over the next three years, it plans to invest up to $95 billion in greening its power operations.

It comes as no surprise that many of the biggest companies in the world are long-established players in global markets.

Yet within the rankings, some of the notable risers compared to 2021 are UnitedHealth Group, which launched from #19 in 2021 to #8 this year and NVIDIA which has climbed to become the 11th largest company globally, up from #24 last year.

By contrast, some of the biggest losers are Meta (Facebook’s parent company) and Alibaba. Meta has fallen across the rankings to #26 in 2022 from #6 in 2021. Meanwhile, Alibaba was once the ninth largest globally but has tumbled to #36. Both companies have seen considerable value wiped from their market caps—roughly 66% and 28%, respectively​​—amid lagging earnings.

With the year coming to a close, it remains to be seen whether the world’s biggest companies stage a comeback in 2023, or face more challenging conditions ahead.

The post Ranked: The 100 Biggest Public Companies in the World appeared first on Visual Capitalist.

0 comments on “Ranked: The 100 Biggest Public Companies in the World”