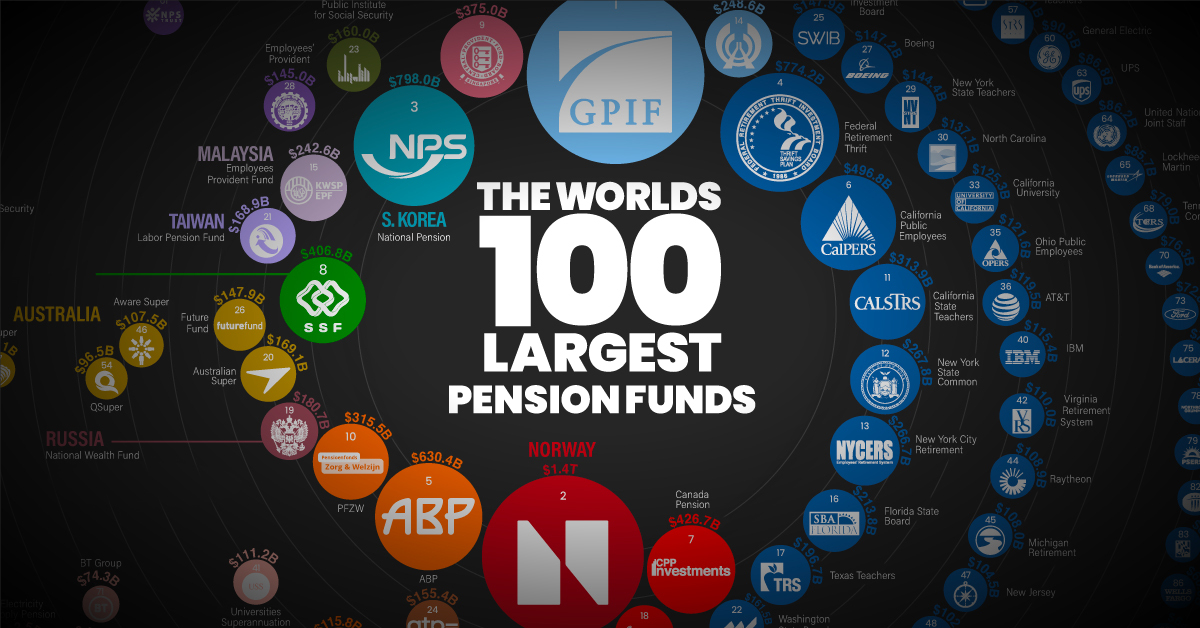 View the full-resolution version of this infographic

View the high-resolution of the infographic by clicking here.

Despite economic uncertainty, pension funds saw relatively strong growth in 2021. The world’s 100 biggest pension funds are worth over $17 trillion in total, an increase of 8.5% over the previous year.

This graphic uses data from the Thinking Ahead Institute to rank the world’s biggest pension funds, and where they are located.

What is a Pension Fund?

A pension fund is a fund that is designed to provide retirement income. This ranking covers four different types:

Among the largest funds, public sector funds are the most common.

Here are the top 100 pension funds, organized from largest to smallest.

Japan’s Government Pension Investment Fund (GPIF) is the largest in the ranking for the 21st year in a row. For a time, the fund was the largest holder of domestic stocks in Japan, though the Bank of Japan has since taken that title. Given its enormous size, investors closely follow the GPIF’s actions. For instance, the fund made headlines for deciding to start investing in startups, because the move could entice other pensions to make similar investments.

America is home to 47 funds on the list, including the largest public sector fund: the Thrift Savings Plan (TSP), overseen by the Federal Retirement Thrift Investment Board. Because of its large financial influence, both political parties have been accused of using it as a political tool. Democrats have pushed to divest assets in fossil fuel companies, while Republicans have proposed blocking investment in Chinese-owned companies.

Russia’s National Wealth Fund comes in at number 19 on the list. The fund is designed to support the public pension system and help balance the budget as needed. With Russia’s economy facing difficulties amid the Russia-Ukraine conflict, the government has also used it as a rainy day fund. For instance, Russia has set aside $23 billion from the fund to replace foreign aircraft with domestic models, because Western sanctions have made it difficult to source replacement parts for foreign planes.

The Future of Pension Funds

The biggest pension funds can have a large influence in the market because of their size. Of course, they are also responsible for providing retirement income to millions of people. Pension funds face a variety of challenges in order to reach their goals:

Some pension funds are turning to alternative assets, such as private equity, in pursuit of more diversification and higher returns. Of course, these investments can also carry more risk.

Ontario Teachers’ Pension Plan, number 18 on the list, invested $95 million in the now-bankrupt cryptocurrency exchange FTX. The plan made the investment through its venture growth platform, to “gain small-scale exposure to an emerging area in the financial technology sector.”

In this case, the investment’s failure is expected to have a minimal impact given it only made up 0.05% of the plan’s net assets. However, it does highlight the challenges pension funds face to generate sufficient returns in a variety of macroeconomic environments.