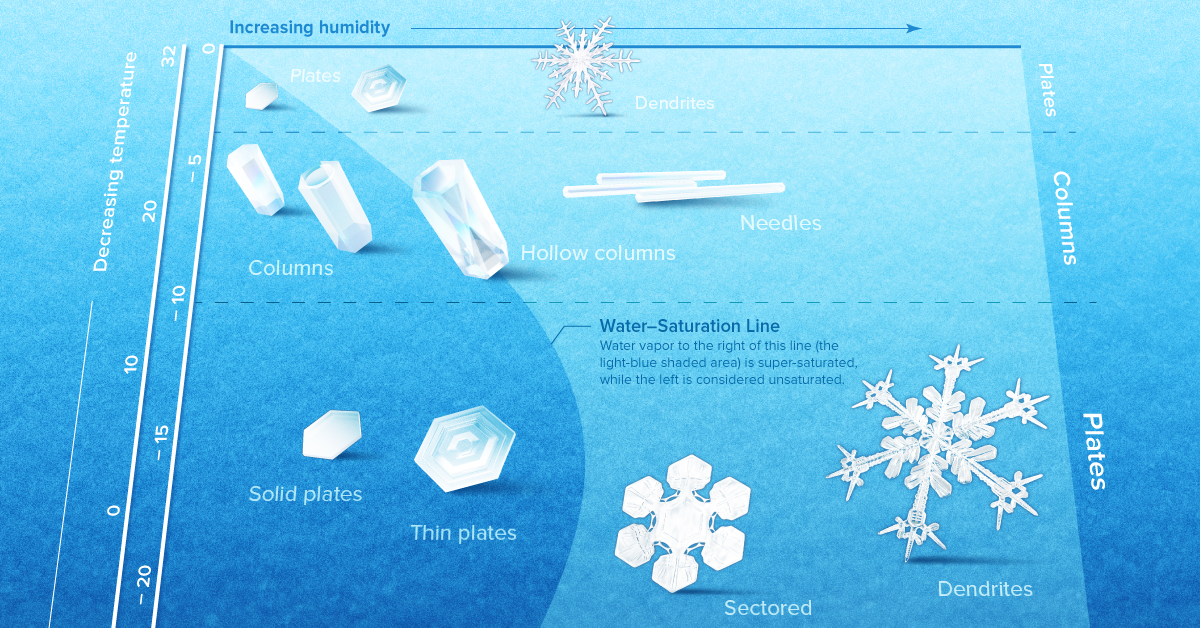 The Art of Snow

If you look at snow up close, you will probably notice that it is made up of thousands of tiny flakes with beautifully complex designs.

These snowflakes are actually ice crystals. They form in our atmosphere, high in the clouds, and transform along their journey to Earth thanks to different factors and forces.

We look at how snowflakes are formed, and what atmospheric conditions contribute to the beautiful intricacies we’ve come to know them for.

How to Build a Snowflake

The designs of snowflakes are actually products of a crystallization process that is controlled by the atmosphere.

Water vapor in the atmosphere latches onto a free-floating speck of pollen or dust and acts as a nucleator. This means that it can begin to add on (ie. nucleate) more water molecules and grow in size. When this happens at cold temperatures, water also freezes and crystallizes.

Despite the many unique styles of snowflakes, they all crystallize in the exact same shape—a hexagon. The reason for this has to do with how water behaves at the chemical level. At room temperature, water molecules flow randomly around each other, forming and breaking bonds endlessly.

When temperatures cool, however, they begin to lose kinetic energy and form more stable bonds. By 0°C, they reorient themselves into an energetically-efficient position, which happens to be a rigid, hexagonal configuration. This is frozen water, or ice.

How these designs materialize is simply a matter of water availability and temperature, a relationship best described in the Nakaya Diagram of Snowflakes.

The Nakaya Diagram of Snowflakes

In the 1930s, Japanese physicist Ukichiro Nakaya created the first artificial snowflakes and studied their growth as an analog for natural snow crystal formation. The Snow Crystal Morphology Diagram, or the Nakaya Diagram, is his handy chart that illustrates how snowflakes are formed.

The diagram illustrates the kinds of snowflakes that form via atmospheric temperature and humidity during a snow crystal’s fall to the ground.

Snowflake size and complexity depend on the humidity of the atmosphere. More water means larger, more intricate snowflakes.

Close to its 100-year anniversary, this detail of the Nakaya diagram still puzzles researchers today. Many continue to theorize and demonstrate how this phenomenon may be possible.

You might be wondering how it is possible that no two snowflakes are identical if they all have a hexagonal inception and can form only columns or plates.

The answer lies in the dynamic nature of the atmosphere.

The atmosphere is constantly changing. As each second goes by, temperature, humidity, wind direction, and a number of other factors bombard a snow crystal as it falls to the ground.

Snow crystals are sensitive to the tiniest of these changes. Water vapor that is crystallizing responds to different exposures which ultimately make new patterns.

The post Visualized: How Snowflakes are Formed appeared first on Visual Capitalist.

0 comments on “Visualized: How Snowflakes are Formed”