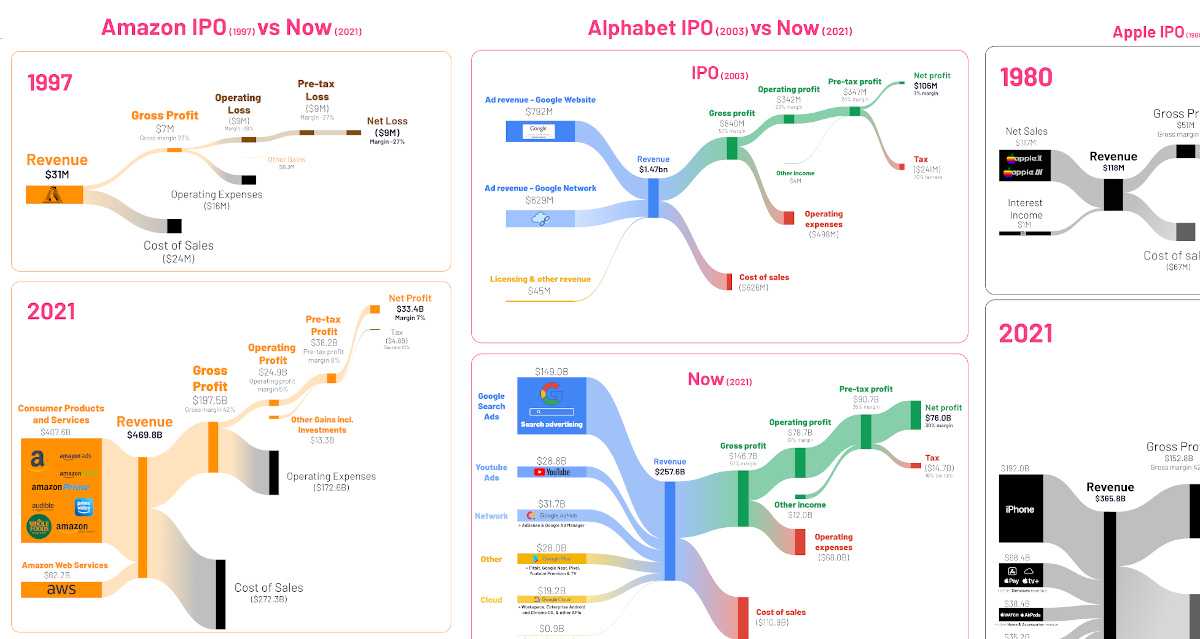 In today’s fast-paced world, companies need to adapt if they want to stay relevant. Even the Big Tech giants can’t get too comfortable—to remain competitive, large corporations like Google and Amazon are constantly innovating and evolving.

This series of graphics by Truman Du illustrates the income statements of five of the world’s biggest companies—Amazon, Apple, Microsoft, Tesla, and Alphabet—and shows how their financials have evolved since the date of their very first public disclosures.

Editor’s note: Click on any graphic to see a full-width version that is higher resolution. Also, because these companies are in some cases 10,000x the size they were at IPO date, the two visual financial statements are not meant to be directly comparable in sizing.

Let’s start with Apple, the first company to go public, and the biggest in the mix:

Back in 1998, Apple went by the name “Apple Computer,” because at the time, the company only sold computers and computer hardware kits. However, over the next decade, the company expanded its product offerings and started to sell various consumer tech products like phones, portable music players, and even tablets.

Apple’s consumer tech was so successful, that by 2007 the company decided to drop “Computer” from its name. Fast forward to today, and the company also generates revenue through services like Apple TV and Apple Pay.

While computers are still a core part of its business, the iPhone has become the biggest revenue driver for the company.

In 2021, Apple generated $94.7 billion in profit at a 26% margin. Today, the company is one of the only Big Tech companies that has been able to withstand the industrywide drop in valuations. Sitting strong with a market capitalization over $2 trillion, the company is worth roughly the same as Amazon, Alphabet, and Meta combined.

Microsoft, one of the oldest companies on this list, went public in 1985. Back then, the company only sold microprocessors and software—hence the name Micro-Soft.

And while Microsoft’s flagship operating system (Windows) is still one of its major revenue drivers, the company’s product offerings have become much more diverse.

When Amazon went public in 1997, the online retailer was only selling books.

But by 1998, Amazon started rapidly expanding its product offering. Soon it was selling everything from CDs and toys to electronics, and even tools.

Fast forward to now, and the ecommerce segment of Amazon has become just a portion of the company’s overall business.

Amazon is also a cloud-service provider (AWS), supermarket chain (with its grocery brands Amazon Fresh and its acquisition of Whole Foods) and even a video streaming service (Prime Video). In particular, AWS stands out as an important part of Amazon’s overall business, driving a whopping 74% of operating profits.

When Google went public in 2003, it was a simple search engine that generated about $1.4 billion in ad revenue from its website and cloud network.

Today, the company (now renamed Alphabet) has become synonymous with the internet, and accounts for an overwhelming majority of the internet’s search traffic. Because of this, it generates hundreds of billions in ad revenue each year.

Tesla’s IPO was in 2008, making it the youngest company on the list. And as the newest kid on the block, Tesla’s revenue streams haven’t changed as drastically as the others have.

However, while electric vehicles are still the company’s main revenue driver, Tesla has managed to dip its toes into other verticals over the last 10 years. For instance, in 2021, about $2.8 billion of its $53.8 billion in revenue came from energy generation and storage.

The post Visualizing Financials of the World’s Biggest Companies: From IPO to Today appeared first on Visual Capitalist.

0 comments on “Visualizing Financials of the World’s Biggest Companies: From IPO to Today”