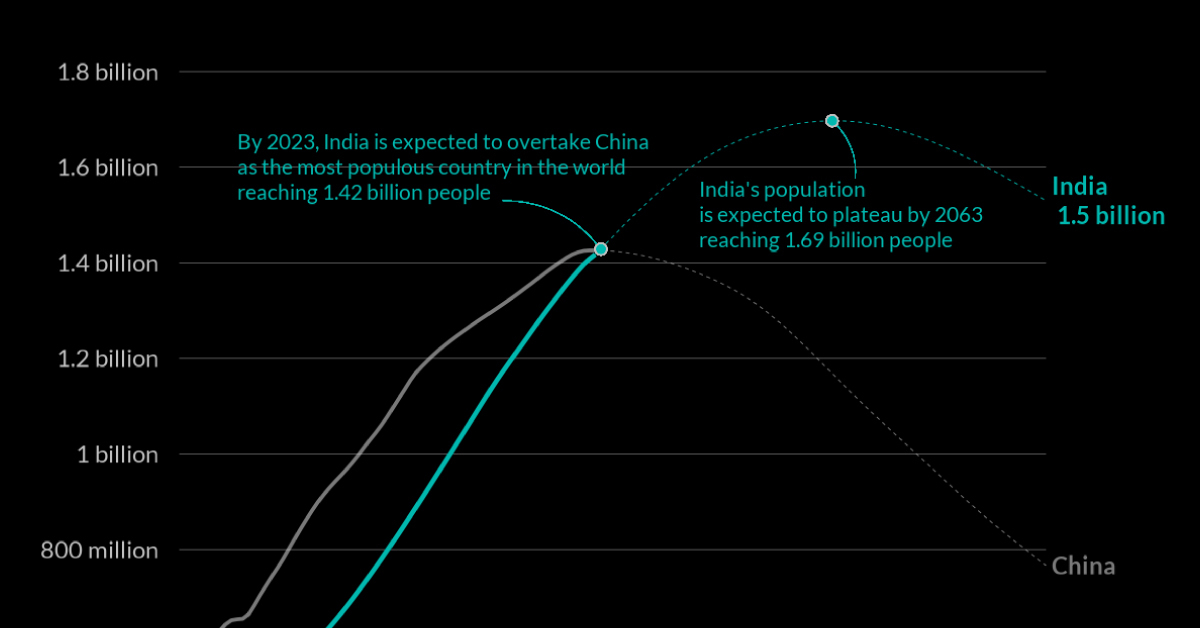 For years, India has been on track to overtake China as the world’s most populated country.

In fact, we’ve covered this phenomenon in past articles, back when India was expected to overtake China’s population by the end of the decade.

However, according to the UN’s latest population prospects, this takeover is projected to happen sooner than previously expected—as early as next year.

This graphic by Pablo Alvarez provides an up-to-date chart of India’s population growth projections compared to other countries. Projection data from Our World in Data ranges from 1800 all the way to until 2100.

For over three centuries, China has had the largest population of any country in the world.

In the 1800s, China’s population was about 322 million, which was nearly double India’s at the time. And until the mid-20th century, both countries’ populations stayed relatively stable.

However, in 1949, China’s population started to experience dramatic growth. This occurred after the Chinese Civil War when the People’s Republic of China was first established.

Around the same time, India’s population had also started to increase. Since both countries were experiencing population booms, the status quo remained the same, and China kept its position as the world’s most populated country.

China’s baby boom lasted two decades. But by the late 1970s, the Chinese government implemented a one-child policy in an attempt to slow things down and control population growth, out of fear that China was becoming overpopulated.

The plan worked—according to China’s National Health and Family Planning Commission spokesman Mao Qunan, the government’s efforts ended up reducing the number of births over the years by roughly 400 million.

These days, China has one of the most rapidly aging populations in the world. By 2040, it’s expected that 28% of the country’s population will be over the age of 60.

Does this mean that India’s GDP will eventually outpace China’s? Not necessarily.

As quoted in an article published in Business Standard, Madan Sabnavis, Chief Economist of the Bank of Baroda says that India needs to increase its labor participation, as well as general access to education, in order to reap the benefits of its increasing working-age population.

As of 2022, India’s workforce participation rate sits at 46%, compared to China’s 68%. How will this change in the future?