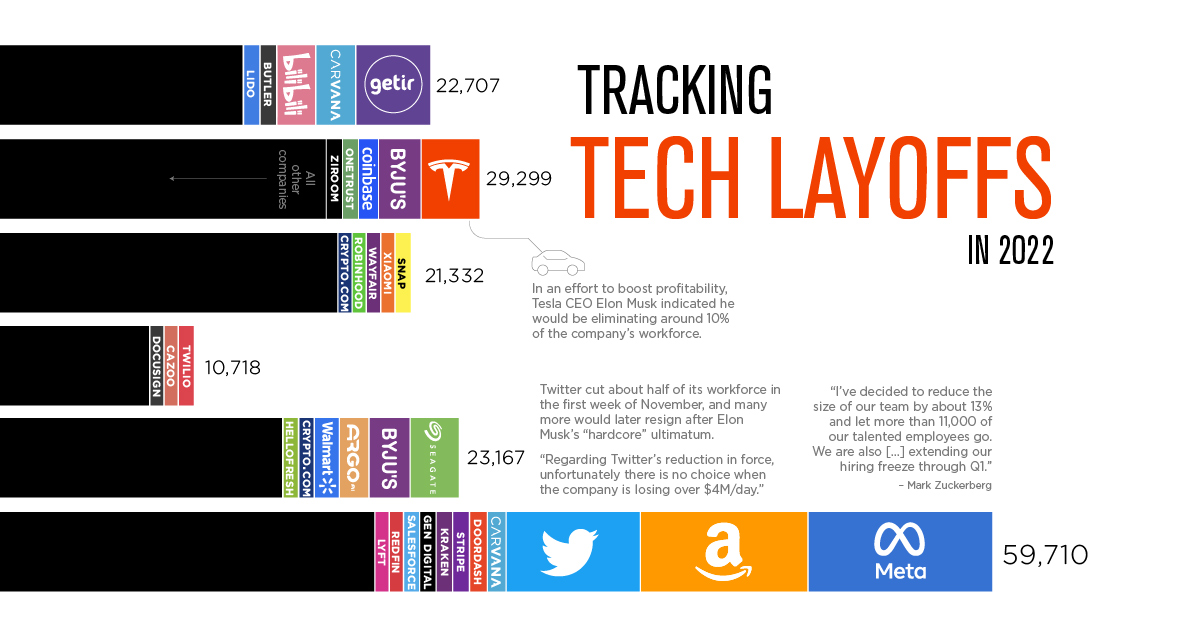 Layoffs are happening so frequently in 2022 that everyone from Crunchbase to Indian tech website Inc42 are now keeping track.

There is even a standalone website tracking all tech layoffs in the United States.

For the purposes of this infographic, we’ve used data from trueup.io which includes a mix of U.S. and international tech companies that have let workers go in 2022.

Layoffs are having an impact on the entire tech industry, and the phenomenon is global. Here are some of the most high-profile examples of mass layoffs in 2022:

Meta: The social media giant faces competition from upstarts like TikTok, as well as a pool of ad dollars that is shrinking in the face of a faltering economy. Although this reduction in headcount is painful for Meta, it’s worth considering a more broad perspective. In close to two decades of doing business, these will be the company’s first wide-scale job cuts.

Twitter: Though Meta wins with sheer volume of cuts, Twitter’s mass layoffs are surely the most dramatic. In early November, the company’s iconoclastic new owner, Elon Musk, slashed 50% of the workforce, and soon after, thousands of contractors also suddenly lost their jobs. Estimating how many employees remain at the company will remain a challenge until the dust settles.

Byju’s: Layoffs are not just confined to the United States. India’s sizable tech sector is also facing cuts. EdTech giant, Byju’s, laid off 2,500 employees in October—around 5% of its total workforce.

Peloton: The high-end workout equipment company has been dropping its headcount throughout the year. In the visualization above, companies like Meta stand out as they eliminated thousands of employees all at once. Peloton, however, executed its layoffs in stages throughout the year. After strong growth during the pandemic began to stagnate, the company is slimming down to regain profitability.

Why are Tech Companies Laying Off so Many People?

The stated reasons for letting so many workers go are economic uncertainty (external factors) and poor performance (internal factors).

Goldman Sachs Research points out that “higher interest rates and tighter financial conditions disproportionately impact the sector because tech company profits are typically expected further out in the future and therefore subject to greater duration risk.”

Shrinking advertising budgets and the implosion of the cryptocurrency market are also factors that may have influenced the decision to cut headcounts. Twitter and Snapchat fall into the former bucket, while Coinbase and Kraken fall into the latter.

What Do These Job Cuts Mean for the Economy?

At face value, widespread layoffs in the tech sector might appear to be a bad omen for the wider economy—especially given the outsize influence tech companies have on the markets.

Thankfully, this does not appear to be the case. Payroll and wage data from the U.S. government have exceeded expectations, and the country’s unemployment rate is close to a half-century low.

So, why the disconnect?

First off, tech jobs only account for less than 3% of total employment in America. As well, tech workers who’ve lost their jobs have a high likelihood of securing a new job in short order.

It remains to be seen whether November will be the peak of job cuts. Employers generally try to avoid letting people go right before the holiday season. One week into December, Trueup.io has tracked 7,600 more layoffs.