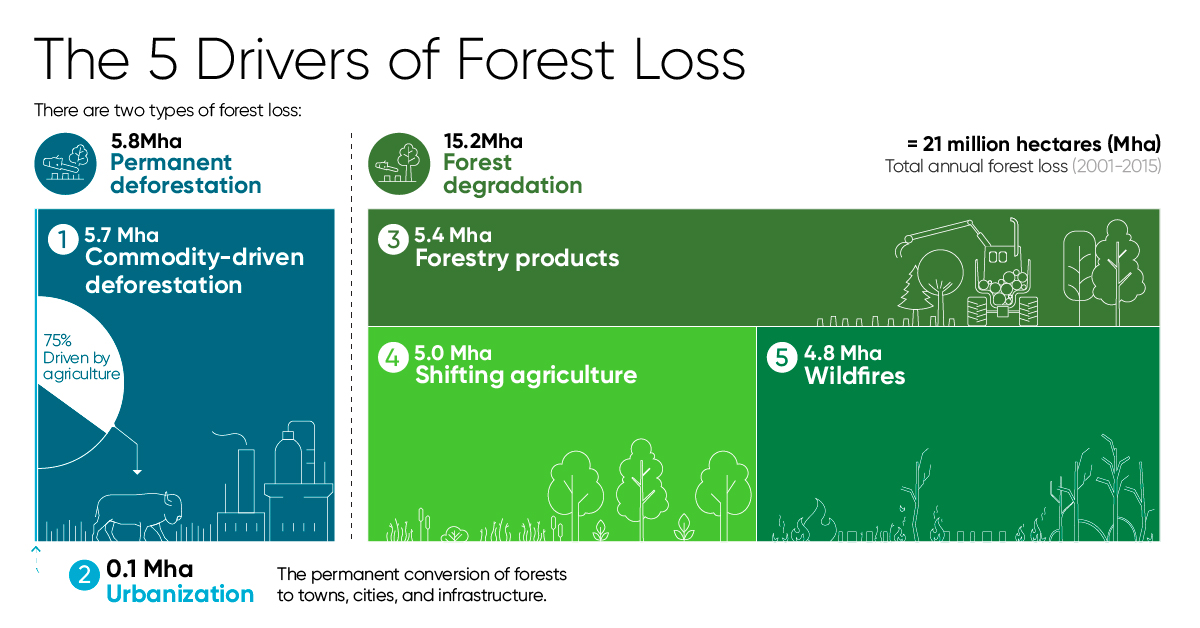 The following content is sponsored by Carbon Streaming Corporation.

The world has lost one-third of its forests since the ice age, and today, approximately 15 billion trees are cut down annually.

Forests are wellsprings of biodiversity and an essential buffer against climate change, absorbing billions of tonnes of carbon dioxide emissions every year. Yet, forest loss continues to grow.

The above infographic sponsored by Carbon Streaming Corporation highlights the five primary drivers behind forest loss.

‘Forest loss’ is a broad term that captures the impacts of both permanent deforestation and forest degradation. There is an important distinction between the two:

Forest degradation accounts for over 70% or 15 million hectares of annual forest loss. The other 30% of lost forests are permanently deforested.

The harvesting of forestry products like timber, paper, pulp, and rubber accounts for the largest share of forest loss from degradation. This process is often managed and planned so that forests can regrow after the harvest.

Shifting agriculture and wildfires each account for around 5 million hectares or one-fourth of annual forest loss. In both cases, forests can replenish if the land is left unused.

Urbanization—the conversion of forests into land for cities and infrastructure—is by far the smallest contributor, accounting for less than 1% of annual forest loss.

How Much Carbon Do Forests Absorb?

The world’s forests absorbed nearly twice as much carbon dioxide (CO2) as they emitted between 2001 and 2019, according to research published in Nature.

On a net basis, forests sequester 7.6 billion tonnes of CO2 equivalent (CO2e) annually, which equates to around 15% of global CO2e emissions. As the impacts of climate change intensify, protecting forests from deforestation and degradation is increasingly critical.

Where does this data come from?

Source: Our World in Data

0 comments on “Visualizing the Five Drivers of Forest Loss”