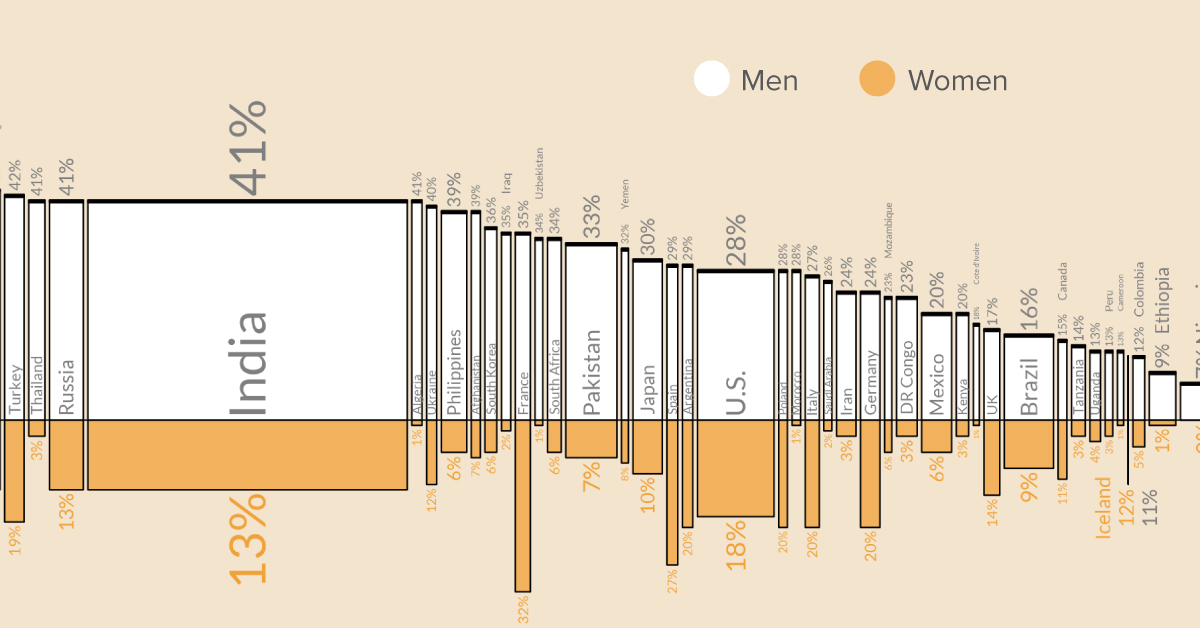 Visualizing The Smoking Population of Countries

According to Our World in Data, about one-in-four adults around the world smoke tobacco—at least on an occasional basis. And in many countries, a majority of these smokers are men.

But just how big is the smoking gender gap, and which places have the biggest divide between men and women when it comes to smoking? This graphic by Pablo Alvarez visualizes the smoking population breakdown across the globe.

The dataset is compiled by Our World in Data and uses the latest available figures (2020) that’ve been pulled from the World Bank. The data includes men and women aged 15 and over, and focuses on the world’s top 50 most populous countries.

It’s also worth highlighting that, for the purposes of this study, a smoker is defined as someone who smokes any form of tobacco (cigarettes, cigars, pipes, etc.) and includes people who smoke on a daily, non-daily, and occasional basis.

The Breakdown of Men versus Women Smokers

According to the figures in the dataset, countries in Asia and Africa seem to have the biggest gender gap when it comes to smoking.

In fact, nearly all the countries included in the study have more male smokers than women—However, there are a few outliers.

For example, in the small Micronesian island of Nauru, a slightly higher percentage of women smoke than men. And in Iceland, there’s a similar trend—12% of women smoke compared to 11% of men.

Despite these few anomalies, the general consensus is that men tend to smoke more than women. And according to Our World in Data, this male-bias can be seen in health statistics. For instance, research by the World Health Organization has found that men are more likely to die from lung cancer.

The Knock-on Effects of Smoking

As many people are now aware of, smoking can lead to major health problems. In fact, it’s estimated that about 15% of deaths around the world are linked to smoking—Either directly, or from second-hand smoke.

Over the last two decades, knowledge around the dangers of smoking has become more widespread, and changes to legislation has forced cigarette companies to put health warnings on their packaging.

And as discourse around smoking and its health-risks has started to circulate more rapidly, the number of smokers worldwide has started to decrease. Here’s a chart showing the drop in smokers in select countries, from 2000 to 2020:

Will the smoking population continue to drop in the next few decades, or have we reached a plateau?

The post Visualizing The Smoking Population of Countries appeared first on Visual Capitalist.

0 comments on “Visualizing The Smoking Population of Countries”