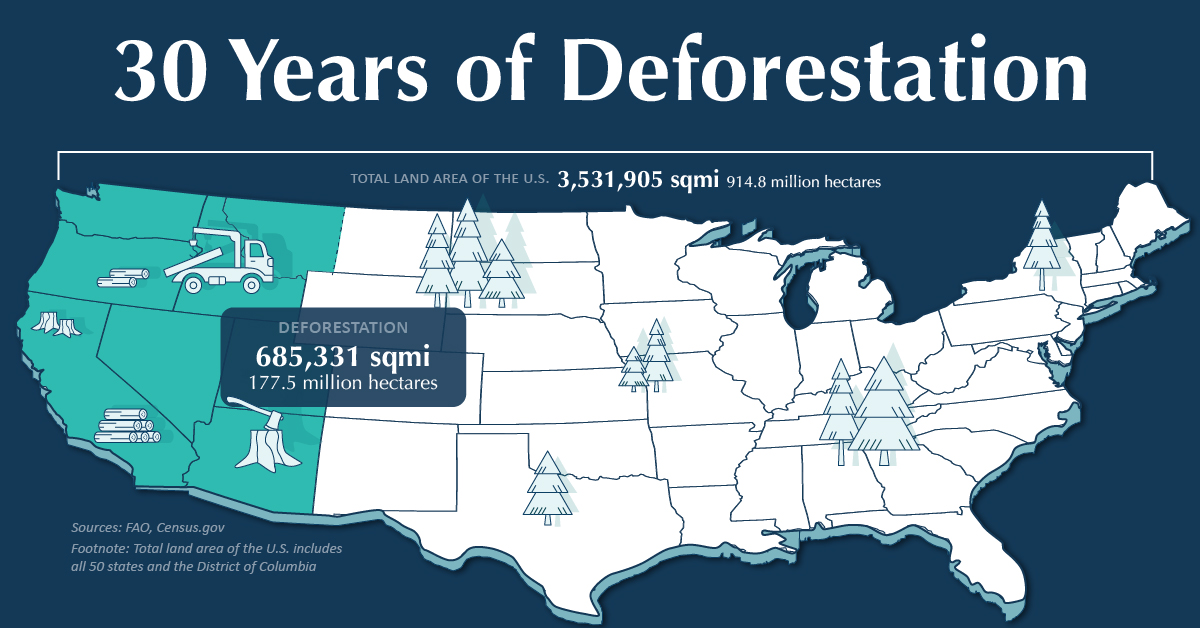 Estimates say deforestation practices need to be thwarted by 75% by 2030, in order to effectively manage rising global average temperatures. But when looking at deforestation data over the last 30 years, it’s clear we’ve gone in the opposite direction.

This sponsored graphic from The LEAF Coalition looks at the total land lost to deforestation since the 1990s and compares it to the total land in the U.S. as a point of reference.

The Rise and Fall of Forests

Approximately 4% of the world’s forests have been lost since the 1990s. This is equivalent to 177.5 million hectares or 685,000 square miles, and greater than the total land area of 179 countries in the world. In addition, this covers one-fifth of the land in America. Here’s how the average global annual net change in forest area looks on a decade-by-decade basis.

A silver lining here is that in the most recent decade that’s passed we’ve seen a reduction in the amount of deforestation. Compared to the late 1990s, the decade between 2010 and 2020 has seen yearly deforestation reduce by 3.1 million hectares from 7.8 million to 4.7 million.

However, there’s still plenty of work that needs to be done and the devastating impact deforestation has on the environment cannot be understated.

Not Out of the Woods Yet

By some estimates, 30% of the globe’s carbon emissions are absorbed by forests each year. In order to keep our global average temperatures at 1.5°C, action needs to ramp up to diminish deforestation. One solution is to open up funding and participation to the private sector and bridge their efforts with that of the public sector.

0 comments on “What Does 30 Years of Global Deforestation Look Like?”