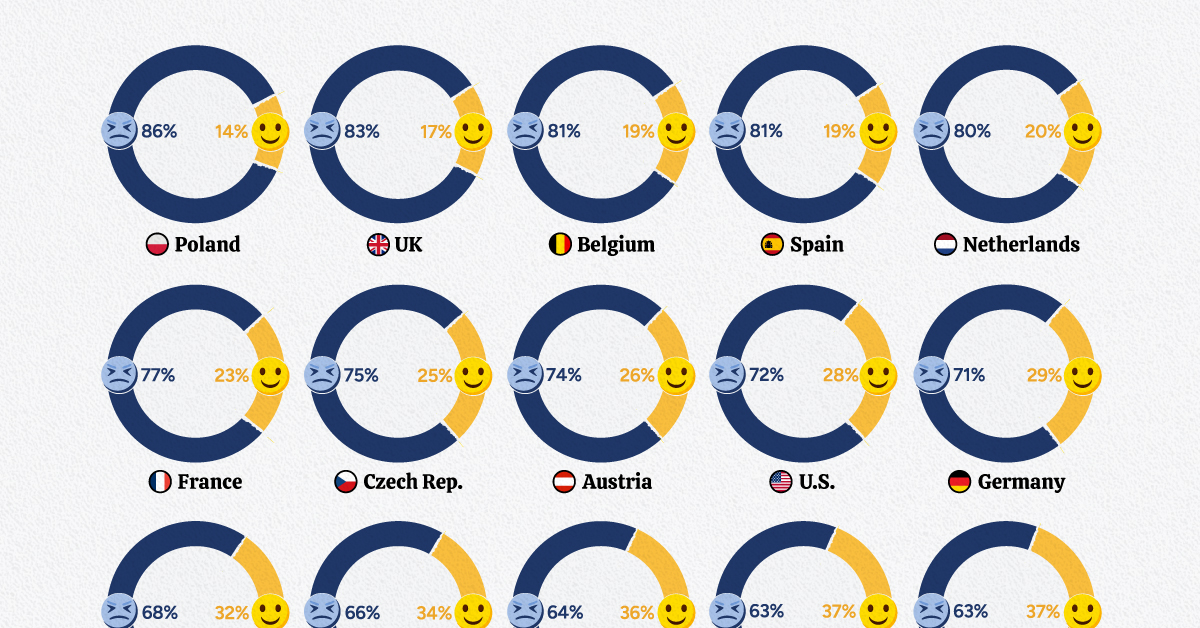 Which Populations Feel Their Country is on the Wrong Track?

Plato once used the allegory of a Ship of Fools to push for his vision of a wise philosopher-king as the ideal pilot for a ship of state.

Looking at the most recent numbers from Morning Consult Political Intelligence’s Projections of Country Trajectories, you would be forgiven for thinking that a great many people believe that their ship of state is piloted by fools.

With the impact of the pandemic, rising inflation, and growing geopolitical instability, it’s probably not surprising that most respondents feel their countries are on the wrong track; India and Switzerland were notable exceptions.

Below are some of the stand-out stories that we found digging through the data.

Midterm elections have rarely been kind to the incumbent party in U.S. politics and the cost of living crisis, an unpopular president, and the aftermath of the global pandemic pointed towards an electoral bloodbath. This year’s election was also expected to set a new spending record, with over $9 billion raised.

Even so, despite 72% of respondents thinking that the country is on the wrong track, the governing Democrats have defied expectations and posted a historic performance during the November 8, 2022, midterm elections. To put this into context, in a president’s first term, there have been three previous instances (since 1922) of the incumbent’s party gaining (or not losing) Senate seats and losing fewer than 10 seats in the House.

Also worth noting is the large spike in negative sentiment in January 2021, following the U.S. Capitol attack, followed by the convergence of negative and positive sentiments as the peaceful transition of power became more assured.

Horace, in Odes 1.14, describes a ship of state that is flailing at sea that eventually rights itself, claiming towards the end of the poem that “it’s my longing and no light love you carry.”

Something like that may be happening in Brazil following the loss of the often turbulent, COVID-19-denying President Jair Bolsonaro to political rival Luiz Inácio Lula da Silva in an Oct. 20, 2022, election runoff.

However, with respondents evenly split on where the country is going and the presidential election results being so close (50.9% vs. 49.1%), Lula will have his hands full governing a divided country.

While sentiment was overwhelmingly negative in almost every country tracked in this survey, India stood out as an outlier. India has consistently maintained a positive sentiment of between 60% and 80%, which is something only Switzerland comes close to.

The only blip was a brief period during the spring of 2021. This coincided with a deadly second wave of COVID-19 infections in the country, on top of country-wide protests against the Narendra Modi government’s deeply unpopular farm bill.

In January 2020, Johnson had just won a Tory majority and succeeded in “Getting Brexit Done.” Political scandals and the government’s pandemic response pushed the trendline down. It only recovered briefly in the spring of 2021, following Russia’s invasion of the Donbas region of Ukraine, which Johnson was widely seen as handling well. A personal visit to Kyiv on April 9, 2022, helped cement this.

Then followed Prime Minister Liz Truss’ disastrous mini-budget of Sept. 23, 2022, which saw the pound fall to the lowest-ever level against the dollar and the Bank of England intervene in the bond markets. The ascension of Rishi Sunak to No. 10 Downing Street has only just begun to turn around the low of 89% negative sentiment reported on Oct 23-25, 2022.

To quote the BBC comedy series, Yes, Minister, in another context, “the ship of state is the only ship that leaks from the top.”

The post Which Populations Feel Their Country is on the Wrong Track? appeared first on Visual Capitalist.

0 comments on “Which Populations Feel Their Country is on the Wrong Track?”