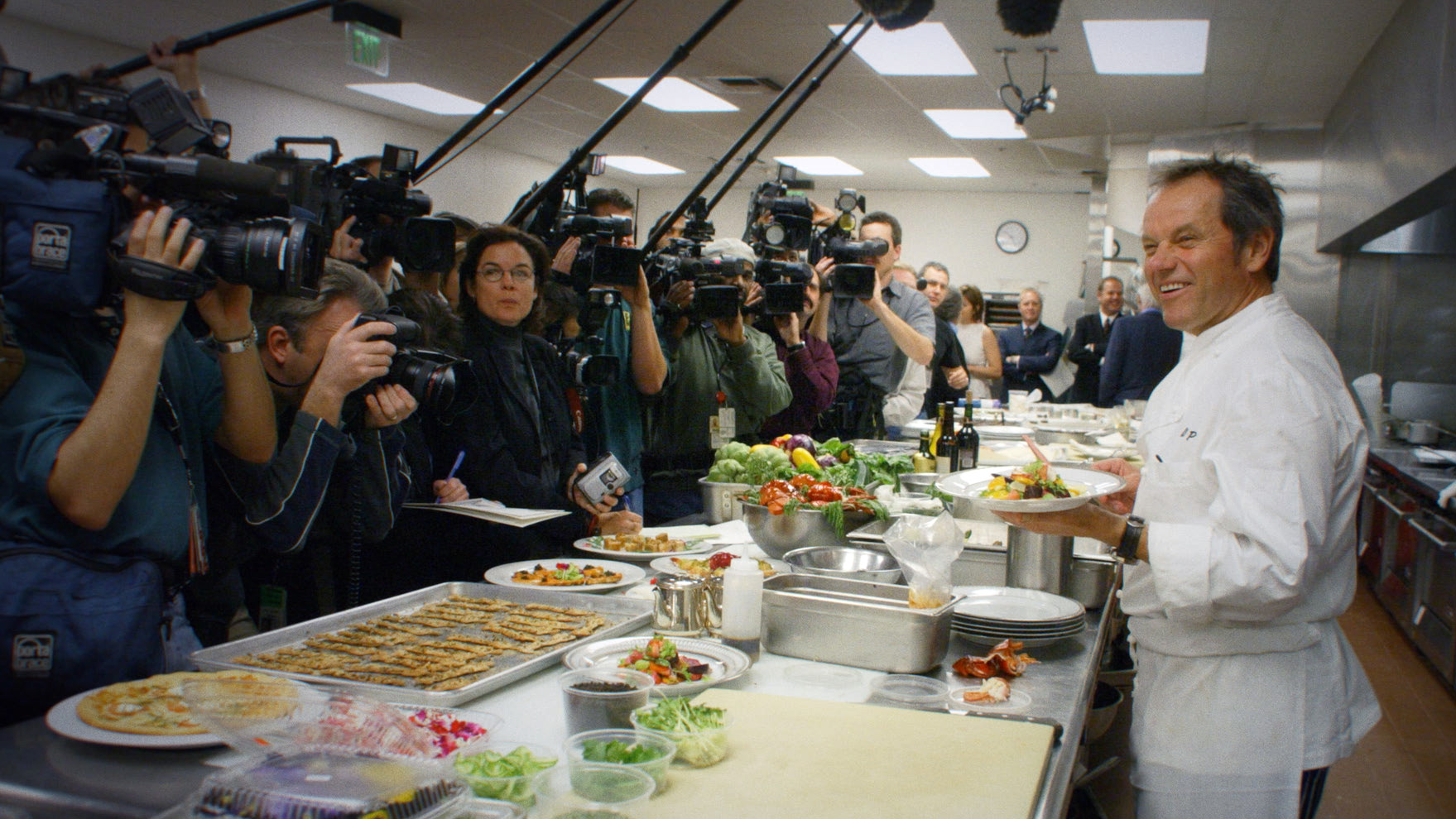 There’s a good story in “Wolfgang” that captures how a chef goes with the flow. It was a bustling night at Spago (the only kind of night Spago had in the ’80s), and in walked Joan Collins, at the apex of her “Dynasty” fame. She always ordered one of Wolfgang Puck’s most popular dishes: smoked salmon on a brioche. But all the brioche was gone, and Puck didn’t want to face the wrath of Alexis. So he improvised. He cooked a pizza without tomato sauce and spread dill cream on it, covering it with smoked salmon and topping it with dollops of caviar. Voilà! A Spago classic was born.

That’s an anecdote to make you hungry, which happens a lot in “Wolfgang,” a Disney Plus documentary that tells Wolfgang Puck’s story, and does it justice, in a crisp light 78 minutes. As it happens, the Pizza Factor looms large in the Puck legend. For starters, he made sublime pizzas: the chewy brick-oven-baked crust, the delicacy of the cheeses, the toppings that were artier than you were used to seeing on pizza (duck sausage!) but in a way that made you go, “How could no one have put this on a pizza before?”

But the other element of the Pizza Factor is that even as Puck was bringing the revolution he called California Cuisine to Los Angeles and, as it turned out, to the rest of America — a revolution in flavor, in farm produce savory with its natural essence, in the fusion of French cooking techniques and a kind of promiscuous American bite — the fact that the restaurant made a divinely hip dish out of pizza became an advertisement for something: that Wolfgang Puck never forget his pleasure center (or ours). He made great food fun, not just tasty and classy and healthy but popping with succulence in a way that appealed to the child within. People went to Spago because they wanted to be seen, but also because it was a nightly culinary party. It was Puck who took the stuffiness out of high-end restaurant bravado, and that spirit swept through New York and other food meccas and spilled into the hinterlands. The former Spago cook Evan Funke says in the film, “He’s the founding father of the way we eat in this country.”

If Puck had done nothing but that, he’d be a giant. But as “Wolfgang,” directed by David Gelb (“Jiro Dreams of Sushi”), entertainingly captures, Puck tumbled into innovations that became more influential than anyone, including him, might have expected. When he decided to set off on his own, he and his partner, Barbara Lazaroff (they were married for 19 years, starting in 1983), bought a dive restaurant along Hollywood Boulevard that they rebuilt from the ground up. We see photographs of it prior to the renovation, and it’s a horror show — like the “before” scenes from an episode of “Restaurant: Impossible.” They decided to have an open kitchen, which was, at that point, a totally out-of-the-box idea. It created a visual drama out of smoke and stainless steel, it let the cooking aromas waft into the dining room, and it put the spotlight right on the chef. “It was theater,” says Lazaroff. “And he was the star.”

A star surrounded by a galaxy of stars. Spago became a place of deal-making that doubled as the Hollywood celebrity cantina. I remember hearing about it, with a touch of awe, from a friend who was starting to break into the film industry. That he went there at all was less impressive than the fact that he’d be seated at one of the good tables, over on the east side of the restaurant. He explained that he would turn down any attempt to seat him at one of the déclassé tables, because that would have made a statement about his clout (or lack of it) in the industry. These weren’t just people eating dinner. They were planets of power orbiting one another at just the right trajectory.

The great food writer Ruth Reichl is interviewed in the film, and as she points out, “In the ’70s, being a chef was a blue-collar job. It was a terrible job. People knew who owned the restaurant, they rarely knew who did the cooking. And Wolf changes that, in a really big way.” He worked with a perfectionism culled from his training in France, yet part of Puck’s talent was also his gift for cultivation. He wasn’t a tall or imposing man, but he had a Mick Jagger-meets-Matt Damon baby face with a hint of the showman’s gleam of Siegfried and Roy. He was cute, sexy, and…well, puckish. He used his Austrian accent with a dramatic articulation, the way Arnold did. At the restaurant, he became friends with the super-agent Michael Ovitz, who talks about how he launched Puck’s TV career. He brought the president of ABC-TV to Spago, and Puck served them a tasting menu to die for, along with a ladle of charm. By the end of the dinner, Ovitz had gotten a deal for Puck to appear on “Good Morning America.”

He took off as a television personality, becoming a fixture on the morning shows and “Late Night with David Letterman,” and it’s no exaggeration to say that the spirit he brought to it — the zest and wit, the cooking seriousness, the anyone-can-do-it casualness — essentially launched the concept of the Food Channel. He was the first celebrity chef (though maybe Julia Child beat him to it), and certainly the first to elevate himself into a brand. In the movie, Puck recalls how Johnny Carson came to Spago one night and, when he was ready to leave, asked if he could have 10 pizzas to go. Puck asked why, and Johnny said that he wanted to freeze them; that’s how good they were. That gave Puck the idea to launch his own quality-controlled frozen-pizza line. (One can joke about the mass-marketing, but when I spy a Wolfgang Puck outpost in a cuisine-impaired airport, I breathe a sigh of relief.) And then, of course, there were all the restaurants: the one in Vegas, the ones around the world. He became an empire.

“Wolfgang” tells this story with a mouth-watering glee that’s irresistible, and it’s the singularity of it that’s compelling. Wolfgang Puck became a monumental success story but never planned on it. The film goes back to his roots in Austria, where he fell in love with the kitchen at a young age, cooking Wiener schnitzel and liver dumplings with his mother and grandmother, but he was haunted by the abusive put-downs of his stepfather. As he admits in the film, he has spent his life trying to outrun that feeling of failure. When he became the chef at the fabled but lousy L.A. restaurant Ma Maison, with its AstroTurf carpet, he explains with a laugh how terrible the food was there, and how he knew he could redeem it when he found the Chino Ranch in Del Mar, which grew produce comparable to what he’d seen in France.

I think the film commits a major omission in never mentioning Alice Waters, who truly put this revolution on the map, but it was Puck who activated the new food gospel. And at 71, he’s still at it, with silver hair and an ageless playful warmth, never any pretensions, just a love of food and of life. When he introduces Wiener schnitzel at Spago, and it becomes a huge hit, you feel his story come full circle — and the dish looks so golden crispy luscious you want to order it right there. The one “dark side” of Wolfgang Puck the movie presents is that he became so obsessed with work that he neglected his children. That sounds less than scandalous, but Puck owns what a compromise it was; he wasn’t there for his kids. (That’s a weight he bears.) As a movie, “Wolfgang” is short and sweet enough that there are many things I’m sure it leaves out. But what’s there is real, and as savory as it should be.